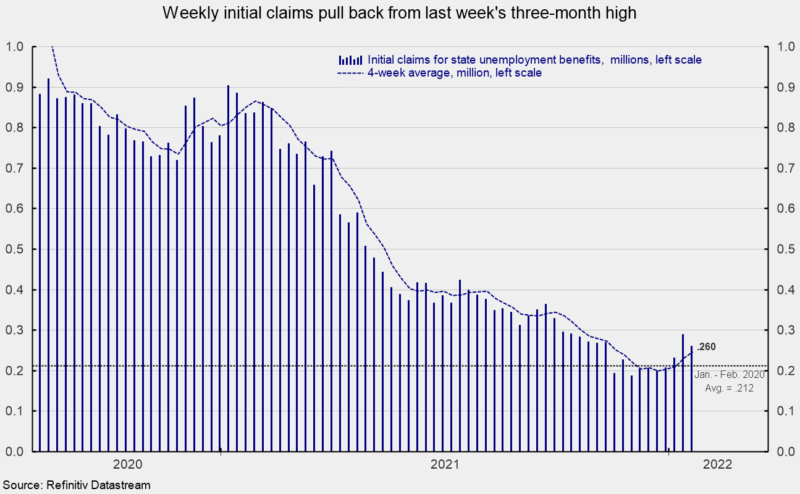 The four-week average rose in the latest week – the fourth increase in a row and the fifth in the last six weeks – coming in at 247,000, a rise of 15,000. Weekly initial claims data continue to suggest the labor market remains very tight.

The number of ongoing claims for state unemployment programs totaled 2.060 million for the week ending January 8, a rise of 11,956 from the prior week (see second chart). State continuing claims remain above the 2 million mark but slightly below their pre-pandemic level of 2.111 million (see second chart).

Continuing claims in all federal programs totaled just 80,899 for the week ending January 8, a drop of 3,512. For January and February 2020, the average for Federal continuing claims was 34,174. Though the current numbers are above the pre-pandemic average, they are just a fraction of the 16.6 million peak and largely reflect the end of the emergency Pandemic Unemployment Assistance program and the Pandemic Emergency UC program.

The latest results for the combined Federal and state programs put the total number of people claiming benefits in all unemployment programs at 2.141 million for the week ended January 8, a rise of 8,444 from the prior week, the third increase in a row.

Initial claims have trended higher over the last few weeks but remain at an extremely low level by historical comparison. The recent wave of new Covid cases could be a contributing factor to the rising trend over the last few weeks and could be a threat to the ongoing recovery in production. Still, the low level of claims combined with the high number of open jobs suggest the labor market remains very tight.

This article, Weekly Initial Claims for Unemployment Benefits Fell in the Latest Week, was originally published by the American Institute for Economic Research and appears here with permission. Please support their efforts.