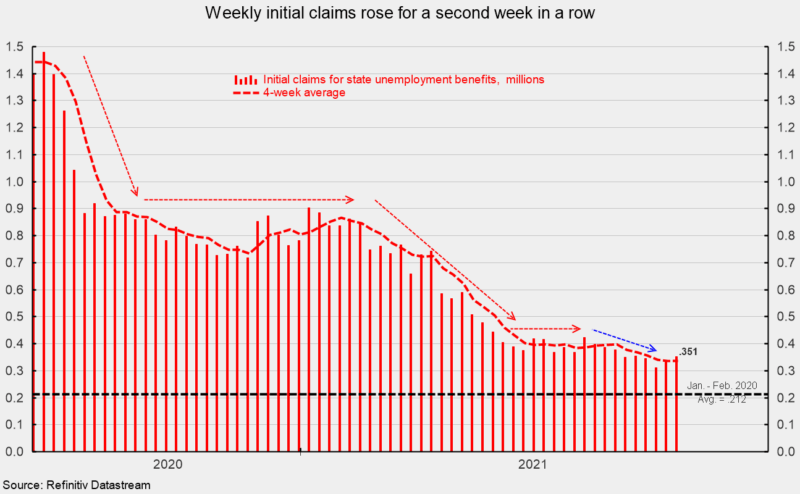 Initial claims for regular state unemployment insurance totaled 351,000 for the week ending September 18, a rise of 16,000 from the previous week’s revised tally of 335,000 (see first chart). Initial claims have risen for two consecutive weeks and three of the last five weeks.

The four-week average fell 750 to 335,750, the lowest of the pandemic. The recent surge in new Covid cases has been a setback for some parts of the economy, particularly for companies looking to bring workers back to corporate offices and the small businesses that cater to them.

Conversely, some areas of economic activity continue to expand, particularly the manufacturing sector, and there continues to be a record number of openings across many industries. This would suggest that layoffs are likely to trend lower, but the path may be extended and more volatile. Furthermore, the combination of labor difficulties, materials shortages and logistical problems in the manufacturing sector is likely to sustain upward pressure on prices in the short-to-medium term.

The number of ongoing claims for state unemployment programs totaled 2.367 million for the week ending September 4, a drop of 290,134 from the prior week and the largest weekly decline since July 24. It is also the seventh consecutive week below 3 million (see second chart).

Continuing claims in all federal programs totaled 8.884 million for the week ending September 4, a drop of 566,306. That is the largest decrease since July 24, the 10th consecutive below 10 million and the first week below 9 million since the start of the pandemic. However, it is also only the second decline versus three increases over the last five weeks (see second chart).

The latest results for the two programs put the total number of people claiming benefits in all unemployment programs, including all emergency programs, at 11.250 million for the week ended September 4, a fall of 856,440 from the prior week, and the lowest of the pandemic (see second chart).

The labor market remains tight with the number of open jobs hitting a new record high in July. However, the recent surge in new Covid cases creates uncertainty and may be resulting in some additional layoffs despite the tight market. Businesses and consumers are adapting to the new Covid world, but the waves of new cases will continue to create uncertainty for the economic outlook.

This article, Weekly Initial Claims for Unemployment Benefits Rise Again as Continuing Claims Fall, was originally published by the American Institute for Economic Research and appears here with permission. Please support their efforts.