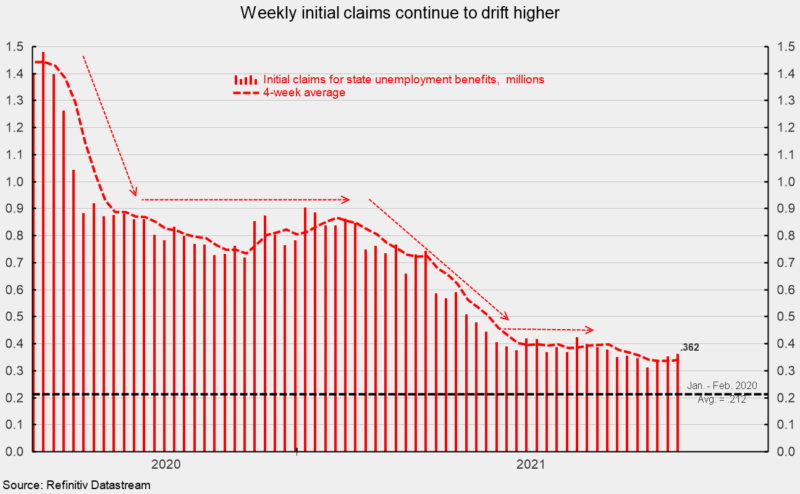 The four-week average rose 4,250 to 340,000, matching the number from September 4th and breaking a string of six consecutive declines. The recent surge in new Covid cases continues to be a setback for some parts of the economy.

The number of ongoing claims for state unemployment programs totaled 2.501 million for the week ending September 11, a rise of 134,295 from the prior week and the first increase since August 14. State continuing claims have risen just twice in the last nine weeks and have been below 3 million for eight consecutive weeks (see second chart).

The latest results for the combined Federal and state programs put the total number of people claiming benefits in all unemployment programs, including all emergency programs, at 5.028 million for the week ended September 11, a fall of 6.223 million from the prior week (see second chart).

The labor market remains tight with the number of open jobs hitting a new record high in July. However, the recent surge in new Covid cases creates uncertainty and may be resulting in some additional layoffs despite the tight market. Businesses and consumers are adapting to the new Covid world, but the waves of new cases will continue to create uncertainty for the economic outlook.

This article, Weekly Initial Claims for Unemployment Benefits Rose for the Third Consecutive Week, was originally published by the American Institute for Economic Research and appears here with permission. Please support their efforts.