Yes, the High Inflation Rates Will Continue in 2022 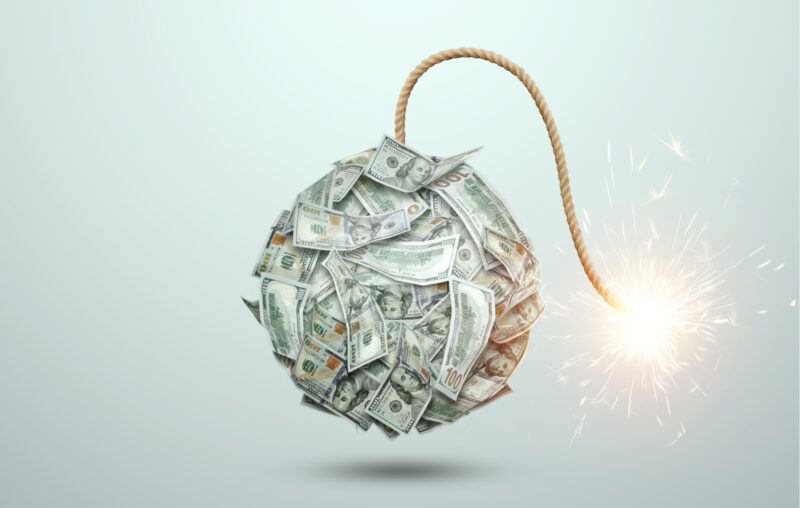 When do government spending and budget deficits cause inflation? Answer: When the government spending is financed by borrowing from the Federal Reserve. The Fed is the great money creator. When the Fed purchases assets, it does not have to check its bank account. It can merely write a check and thereby create money out of thin air. When a substantial share of government spending is financed by this method, the money supply will increase, and soon thereafter the inflation rate will rise. This linkage between rapid money growth and inflation is a basic law of economics, something like the law of gravity in physics.

This is precisely what has happened during the past two years. Regardless of supply chain challenges, monetary policy is primarily responsible for the current inflation. Between March 2020 and March 2021, Congress passed and the president signed three COVID-related bills totaling $5.5 trillion. These bills caused federal expenditures to increase from $4.8 trillion in 2019 to $6.8 trillion in 2020 and $7.0 trillion in 2021. This $4.2 trillion increase in federal spending over the two years was financed entirely by borrowing from the Fed. Fed holdings of financial assets, mostly Treasury bonds and mortgage-backed securities of federal housing authorities, increased from $4.2 trillion in February 2020 to $8.8 trillion in December 2021. Thus, the Fed has funded all of the increase in federal spending during the past two years, and even a little more.

During 2020, the M2 money supply, a broad measure of money flowing through the economy, increased by 25 percent. This expansion is far greater than both the annual money growth of 6 percent during 2010-2019 and the economy’s long-term annual real growth rate of 3 percent. Given this huge 2020 expansion in the money supply, forecasting the surge of inflation in 2021 was an easy call. In February of 2021, AIER published an article by one of the authors of this paper (Gwartney) “Yes, this time there will be inflation.” Of course, events confirmed the analysis of the article.

The situation for 2022 is similar. In 2021, the Fed provided the financing for the American Rescue Plan of the Biden Administration and the $2.2 trillion increase in federal spending. Reflecting this financing of government with money creation, the M2 money supply increased by another 13 percent in 2021. Again, this expansion in the money supply is far greater than the growth of output and it is sure to cause inflation in 2022.

Monetary expansion exerts an impact on output and prices with a lag. Historically, the initial observable effects appear in the form of rising prices of commodities and real assets. Output and employment are generally affected with a lag of 6 to 18 months. We are currently experiencing the impact of the money growth on the prices of real assets (houses and stocks) and output. The lag between monetary expansion and the general level of prices is typically longer, 12 to 30 months. Thus, the inflation rate in 2022 and 2023 will reflect not only the 13 percent money supply increase during 2021, but to a lesser degree the 25 percent money growth of 2020. Unfortunately, these high rates of money growth make continuation of the current high inflation rates in 2022-2023 a virtual certainty.

Inflation is a regressive tax that hits those with low and middle incomes the hardest. The inflation tax harms these households disproportionately because they spend a larger share of their income on food, transportation, and other basic necessities that are more expensive as a result of the inflation. And these households own only a small share of assets, such as houses and stocks, that increase in value as a result of the inflation. In contrast, the higher asset prices actually benefit those in upper-income categories who own most of these assets. Most politicians, particularly those favoring big government, constantly let everyone know how they despise income inequality. Nonetheless, their spending policies, financed via money creation, generate more of the income inequality they say they abhor.

The Fed is mandated to pursue the twin goals of price stability and full employment. These goals are complementary. If Fed policies achieve price stability, they reduce uncertainty and provide the foundation for full employment. Beginning with the tenure of Paul Volcker, the Fed has done a reasonably good job of keeping the inflation rate low and maintaining full employment. Tragically, this hard-earned stable price credibility has been squandered during the past two years by the Jerome Powell-led Fed. Rather than focusing on Fed responsibilities, the Powell Fed has pandered to members of Congress and presidents seeking to conceal the true cost of spending increases.

The actions of the Powell Fed during the past two years have been both puzzling and disastrous. It is unbelievable that any member of the Board of Governors could think that the Fed could finance a $4 trillion increase in federal spending without causing inflation. Chairman Powell agreed to use money creation to finance the big spending increases of President Trump during 2020 and those of President Biden in 2021. Even after the inflation rate had already soared to 5 percent during the summer of 2021, the Powell Fed continued pouring gasoline on the inflationary fire with its monthly purchases of $120 billion of Treasury and mortgage-backed securities for another nine months.

Astonishingly, the Fed chair does not believe that money matters, even though the inflationary effects of his monetary expansion provide evidence to the contrary. In the Fed’s Semiannual Monetary Policy Report to Congress in 2021, Chairman Powell stated, “The growth of M2 . . . doesn’t really have important implications for the economic outlook.” Later he argued that the connection between money and inflation “ended about 40 years ago.” He believes that we need to unlearn the idea that money is an important determinant of inflation. Instead, we would suggest that the Fed chairman and other members of the Board of Governors need to look at the evidence and recognize that rapid monetary growth always leads to inflation.

The intended insulation of the Fed from political pressures has been undermined. The Treasury has co-opted the Fed and used it to make it easier for politicians to hide the cost of government spending. Then, when the money expansion leads to inflation, the politicians blame the inflation on supply-chain problems, corporate greed, or foreigners. All of this highlights the importance of rules that will make monetary decision-makers more accountable.

We need to adopt something like the monetary arrangements of New Zealand, which may dismiss monetary decision-makers if they fail to keep the inflation rate low, for example, with price increases in the 1 to 3 percent range. A rule of this type would provide monetary policy-makers with a strong incentive to stand up to politicians and maintain price stability.

Unfortunately, it is much easier to get inflation started than to bring it under control. Now the Fed faces another dilemma: a shift to a more restrictive monetary policy to control inflation is likely to result in a recession. One can only hope that the Fed is able to handle this transition better than it has handled the monetary policy of the recent past.

This article, Yes, the High Inflation Rates Will Continue in 2022, was originally published by the American Institute for Economic Research and appears here with permission. Please support their efforts.