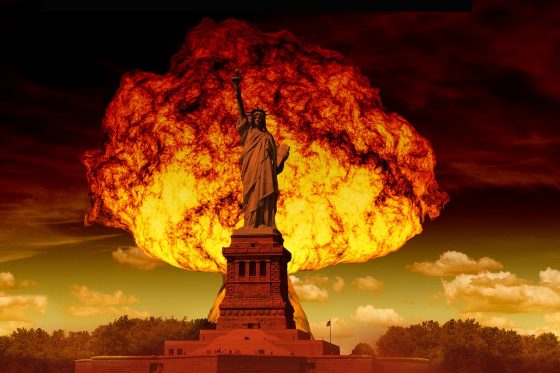 The growing desire for war that we are witnessing in Washington D.C. right now should greatly alarm all of us.  In this environment, voices of reason such as Tucker Carlson and Tulsi Gabbard are being accused of “treason” just because they are calling for peace.  Well, you can add me to that list because I am calling for peace too.  I don’t want nuclear war.  I don’t want billions of people to die.  You would think that we should all be able to agree on those things, but unfortunately the warmongers in Washington seem absolutely determined to keep escalating matters.  That is a very dangerous game, and it is going to be way too easy for someone to make a huge mistake.  Before that day arrives, you may want to figure out where you want to spend your days when global war fully erupts.

At some point, the shooting in Ukraine will end.  Either Russia will achieve total victory, or more likely there will be some sort of a ceasefire agreement.

But when the shooting in Ukraine stops, don’t be fooled into thinking that everything is okay.  The truth is that a much bigger conflict between the United States and Russia has now begun, and both sides are beginning to realize that this is ultimately a struggle for all the marbles.

World War 3 is here, and now we must hope that we can keep both parties from “going nuclear” for as long as possible.

Of course there are some that would like to see the U.S. and Russia shooting at each other very soon.  On Wednesday, Ukrainian President Volodymyr Zelensky begged Congress to establish a “humanitarian no-fly zone” over Ukraine…

The t-shirt-attired Ukrainian President Volodymyr Zelensky addressed a joint session of the U.S. Congress by video on Wednesday and asked for the United States to send warplanes into the sky over Ukraine to create a “humanitarian no-fly zone” or, failing that, to provide Ukraine itself with warplanes.

“Russia has turned the Ukrainian sky into a source of death for thousands of people,” Zelensky told Congress.

Zelensky knows very well that the establishment of a “humanitarian no-fly zone” would require U.S. forces to shoot down Russian jets.

And he also understands that this would spark a shooting war between the United States and Russia.

But you can’t blame Zelensky for trying.  He is trying to save his own skin, and the best way to do that is to drag the United States into the war.

Needless to say, the establishment media in the western world absolutely adored Zelensky’s speech.  The following example comes from CNN…

Zelensky’s words are not only destined for the history books. They will likely energize support for Ukraine’s defense against Russian President Vladimir Putin’s war machine and reverberate across the US.

When America’s top Democrats and Republicans rose side by side to give Zelensky a standing ovation, we knew the Ukrainian President had made his mark. Zelensky, reminding Americans what freedom really means after the country has spent years devaluing it in petty political battles, proves there is a new seriousness in the nation.

And most members of Congress ate it up as well.  Following the speech, Senator Jeanne Shaheen boldly declared that “more must be done to assist Ukraine”…

“It is clear that more must be done to assist Ukraine and hold Putin to account,” Sen. Jeanne Shaheen, New Hampshire Democrat, said in a statement following Zelenskeyy’s virtual address. “The images we watched today underscore the horrific violence – the war crimes – being committed by Putin. He will pay for what he has done.”

‘It’s hurtful to see anything like, you know, thinking about if it were my child, if that were my family, that were my people. You know, I’d be doing the exact same thing that President Zelensky is,’ Ernst said.

‘I would be appealing to every nation possible to get whatever it takes to defeat the Russians and get them the heck out of my country. You know, it makes me want to throw on my uniform, you know, and go help.’

Actually, I would love to see that.

In fact, I would love to see U.S., Ukrainian and Russian politicians all flown to an island where they would resolve this conflict “Battle Royale” style.

But instead, all of the politicians are safe and warm while millions upon millions of Ukrainians deeply suffer.

One of the biggest warmongers in the U.S. Senate, Lindsey Graham, has decided that it is time to start calling Vladimir Putin “a war criminal”…

“It’s time for him to go. He’s a war criminal,” Sen. Lindsey Graham of South Carolina, an erstwhile standard bearer for the Republican Party’s Reagan-era foreign policies, told reporters shortly after Zelenskeyy’s address. “I am asking the Russian people to rise up and end his rein of terror.”

Joe Biden also referred to Putin as a “war criminal” on Wednesday, and he announced that an additional 800 million dollars in military aid would be given to the Ukrainian government.

To be honest, it is quite an impressive list that the Ukrainians will be receiving…

But of course this is not nearly enough for some of the warmongers in Congress.

In fact, 40 Republican senators just signed a letter “in which they strongly disagreed with the decision to not transfer aircraft and air defense systems to Ukraine from Poland”.

Biden was hesitant to take such a step because it might start a shooting war with Russia, but apparently that is a risk that most Republican senators are willing to take.

Thankfully, most Americans do not actually want a shooting war with Russia.

But according to one new survey, more than a third of all Americans “would favor military action even if it risks nuclear conflict with Russia”…

Those of us in the majority need to be much louder than those in the minority, because if the warmongers get their way we could eventually find ourselves in the middle of a nuclear conflict.

And if that happens, there won’t be a future for our country.

Speaking of World War 3, Joe Biden is also escalating matters with China by sending thousands of U.S. troops to Australia…

The Pentagon is to deploy over two thousand troops to Australia by September to join an established rotational force of 200 in anticipation of a conflict with China, according to reports.

The Daily Mail notes that “The contingent is part of an ongoing US initiative in the Indo-Pacific region to prepare for a possible Chinese invasion of Taiwan in coming years.”

The report notes that 1000 marines have already arrived in the country.

The battle lines are being drawn.

Once World War 3 fully erupts, it will be the United States on one side, and Russia and China on the other.

If Americans truly understood what was at stake, there would be massive demonstrations in the streets of every major U.S. city right now.

But the general population just doesn’t get it.

They just assume that war is something that happens on the other side of the globe and that our leaders have everything under control.

Unfortunately, our leaders most definitely do not have everything under control, and when World War 3 fully erupts the death and destruction that we will witness will be absolutely unimaginable.