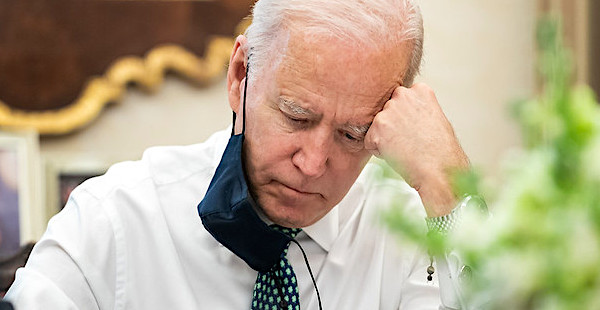 A new poll reveals than “Not Sure” is beating Joe Biden by nine points in the running for the 2024 presidential race.

The Issues in Insights result, released Monday, contains a blunt warning for the Democrat.

“Yes, it’s very early. But if given the choice right now, which Democrats do Americans want to see run for president in 2024? The perhaps not-so-surprising answer emerging from the latest I&I/TIPP Poll seems to be: ‘Anyone but Joe Biden,’” the pollster said.

“In our April opinion poll, we asked Americans of all political affiliations across the demographic spectrum ‘Who do you want to see run for president on the Democratic ticket in 2024?’

“Just 19% of those responding answered ‘Joe Biden, 46th president of the United States.’ The rest of the choices were spread among 18 candidates, along with ‘other’ (6%) and ‘not sure’ (28%). Put another way, 81% of Americans don’t want Biden to run again.”

Others further down the list, with support only in the low single digits, were Stacey Abrams, Cory Booker, Alexandria Ocasio-Cortez, Elizabeth Warren and Joe Kennedy.

Even further back were the likes of Gavin Newsom and Michael Bennet – at 1% support.

“What does this mean?” explained the poll. “It appears that, besides Biden himself, those garnering most support are those who have also been most in the media eye in recent months, for different reasons. Even so, none has caught fire.”

The report continued, “Still, for a sitting president barely into his second year in office to be below 20% in the next election’s preference shows just how low Biden has dropped in the public eye. Last week’s I&I/TIPP Poll results showed that a similar level (21%) of Americans didn’t think Biden would even finish his first term, much less run for a second.”

The 79-year-old Biden reportedly told Democrats last week that he plans to run again in 2024.

The RealClearPolitics average of recent polls reveals Biden is underwater by a “significant” 13 points, with his disapproval at nearly 54%.

The poll pointed out even among only Democrats, “Just 29% say they want Biden on the Democratic ticket in 2024, perhaps the most telling data point in the entire poll.”

“Taken together, it’s ABB — Anybody But Biden,” the pollster said.

Even worse for Biden, the poll said, is that former President Donald Trump has been beating him in most recent polling by significant numbers, up to 6% or 7%.

It was the New York Post that recently pointed out Biden’s obstacles – besides his age and apparent mental decline, based on his appearances in which he loses his train of thought, doesn’t seem to understand where he is or questions given to him, and more.

“Inflation is at its worst in 40 years, erasing wage growth. Crime is surging in many major cities. Employers are struggling with labor shortages. Illegal immigration could top 2 million encounters this year, amid a border crisis that has been spiraling out of control since virtually the moment Biden took office,” the report said.

That’s in addition to his foreign policy failures – like the Afghanistan pullout, the surging division between states on various social issues like abortion and transgenderism – both of which Biden promotes, and complaints within his own party that he needs to be much, much more progressive.

Commentator Paul Bedard at the Washington Examiner said, “Stuck with an unpopular president and a weak replacement bench, Democratic voters appear to be throwing their hands up in frustration when it comes to who they would like as their 2024 nominee.”