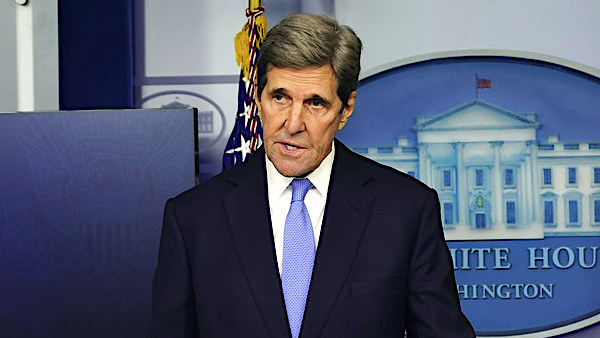 Some officials from Barack Obama’s administration were actively trying to undermine the administration of President Donald Trump while he was in office, according to a new report American Center for Law and Justice.

That organization has been working to track down details of a strategy by ex-Secretary of State John Kerry and others to salvage their nuclear agreement with Iran when Trump withdrew the U.S. from it, essentially for having no benefit for the United States.

The ACLJ has been working on obtaining information about what was going on from various government records, including the State Department. It, in fact, took action under the Freedom of Information Act to get “records of these former high level Obama officials engaged in secret, ‘off the record’ diplomacy with Iran.”

“It’s important that you understand how bad this is – some Obama-Biden era officials (i.e., the Deep State) used back channels to circumvent the sitting president of the United States and met with Iranian officials regarding a new nuclear deal, undermining the Trump administration’s foreign policy efforts,” the ACLJ reported.

Andy Ekonomou, a senior counsel for the ACLJ, explained, “While the Trump administration is in power and is attempting to exercise its constitutional jurisdiction to deal in foreign affairs, we are having back channel communications by former ambassadors and officials of the Obama-Biden administration with people who are our enemies, the Iranians, the biggest exporters of terrorism. And are talking behind our backs. The unmitigated arrogance of this elitist attitude to think that they can get away with doing these things while there is a current administration in office, and they continued to meet with [Mohammad Javad] Zarif, the very polished, urbane foreign minister of Iran at his residence in New York City, right under the nose of our incumbent officers in the Secretary of State’s office in Washington D.C. – this is abhorrent.”

The ACLJ reported it now has obtained a memo from the government regarding the secret meetings Obama officials held with Zarif during the Trump administration.

That Kerry, as a private individual, appeared to be trying to act on behalf of the U.S. government and “salvage,” as the Boston Globe explained, the Iran deal he developed, has been widely reported.

That was when Kerry no longer was in office, but instead was engaging in “shadow diplomacy” with Iran, “promoting foreign policy contrary to that of America’s sitting president, Donald Trump,” the ACLJ said.

The organization said its FOIA action sought records of the workings of the “Deep State” in its effort “to undercut President Trump’s cornerstone foreign policy of withdrawing the United States from the disastrous Obama/Biden Iran Deal.”

The newly seen details come in a October 2018 memo titled, “Notes From ‘Iran and the US: An Off-the-Record Conversation with Foreign Minister Mohamad Javad Zarif.’”

It was just days after Kerry admitted to his secret efforts to negotiate with a foreign power that a meeting was held at the Iranian ambassador’s residence in New York City.

“The memo we unearthed contains notes on the former U.S. diplomats’ conversation with Zarif and his responses ‘to questions posed by a group of U.S. former ambassadors and policy analysts.’

“The key here is ‘former’ – and the date, October 2018, right in the middle of the Trump administration,” the ACLJ reported. “The newly obtained memo, regarding the secret meeting between Zarif and these former U.S. officials, included discussions of nuclear weapons, potential prisoner swaps, Afghanistan withdrawal and negotiations with the Taliban, Houthi rebels, Syria, Suleimani’s popularity in Iran, and the ‘region in turmoil.’”

Former Secretary of State Mike Pompeo, who now is the ACLJ’s senior counsel for global affairs, cited the “arrogance” and “indecency” exhibited by the actions.

“Kerry himself admitted his part in this scheme. And here we obtained a memo showing just that: an off-the-record meeting between Zarif and ‘former’ U.S. diplomats right in the middle of the Trump administration and during the time President Trump was working through the aftermath of withdrawing the United States from the farce known as the Joint Comprehensive Plan of Action (JCPOA) – the Iran nuclear deal,” the ACLJ reported.

The memo includes details on “Zarif’s rhetoric and unbelievable assertions as he attempts to persuade his listeners. For instance, he claims ‘Iran will never seek atomic weapons.’ Well, I guess there’s no cause for concern here. And, ‘It is almost impossible to turn fuel rods into nuclear weapons.’ Almost impossible. He goes on and on, spouting off his distorted pro-Iran view as if it’s fact,” the report said.

Further, the report explained the records show that Kerry “had State Department staff working to send correspondence to Zarif … two weeks after left office on January 20, 2017.”

“It is clear from the emails that the State Department staff were struggling with how to send the letter, we presume because the United States had no official diplomatic relations with Iran,” the report said.

The ACLJ said its pursuit of the details, including the contents of Kerry’s “secret” letter to Zarif, will continue.