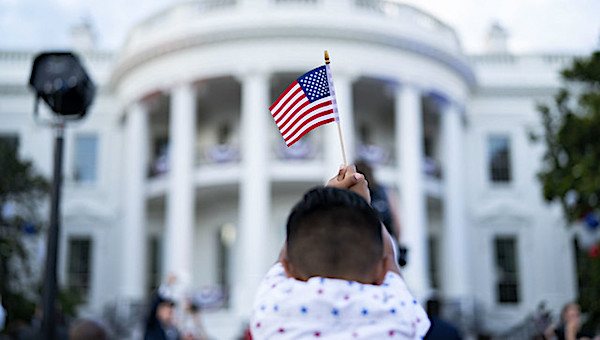 Texas Gov. Greg Abbott has delivered on his promise to send illegal aliens into the heart of Washington, D.C., just blocks from Joe Biden’s current residence at the White House, with the arrival of the first bus carrying migrants.

Biden created a crisis at the southern border the same day he took office by abandoning all of the security measures – which had been proving their effectiveness – that were launched by President Trump.

Since then, millions have surged toward the American southern border, overwhelming the system’s ability to address their needs.

So Abbott announced that he would be providing border communities with charter buses to transport a new flood of migrants, expected from the Biden administration’s cancelation of Title 42, which was used to turn them back, to the steps of the U.S. Capitol in Washington.

Abbott explained the migrants will fare better in the nation’s capital, where the Biden administration can “more immediately” address their needs, the Texas Tribune reported.

The Biden administration derided the comments as a stunt, but now Fox News confirms it’s anything but, with the arrival of the first bus.

“The bus pulled up at approximately 8 a.m. local time, blocks away from the U.S. Capitol building. Fox News has learned that they came from the Del Rio sector in Texas, after coming to the U.S. from Colombia, Cuba, Nicaragua, and Venezuela,” Fox reported.

“Upon the bus’s arrival in Washington, D.C., individuals disembarked one by one except for family units who exited together. They checked in with officials and had wristbands they were wearing cut off before being told they could go.”

The report explained multiple communities in Texas had reached out to join the program, and Texas officials said they sent buses over the weekend to a number of communities.

They said each bus has the supplies for, and can carry, up to 40 immigrants to Washington.

Abbott has explained the problem is that the federal government, which is responsible for immigration policy, is failing to address the disaster that Biden created.

“Texans demand and deserve an aggressive, comprehensive strategy to secure our border—not President Biden’s lackluster leadership,” Abbott said. “As the federal government continues to roll back commonsense policies that once kept our communities safe, our local law enforcement has stepped up to protect Texans from dangerous criminals, deadly drugs, and illegal contraband flooding into the Lone Star State.”

Biden said Title 42 – a public health order that allows border officials to immediately expel anyone from a country where a communicable disease such as COVID-19 is rampant – will end May 23. So far, it has been used to turn away more than 1 million asylum seekers.

A former Trump administration immigration official, John Zadrozny, said in a podcast interview that the U.S. had the border under control until Joe Biden immediately halted construction of the wall, changed asylum policies and allowed illegal aliens to disappear into the country.

Zadrozny, who was interviewed by former Wall Street CEO Bill Walton, served as deputy assistant to the president and acting chief of staff at U.S. Citizenship and Immigration Services during the Trump administration.

We had the border under control until Joe Biden immediately halted construction of the wall, changed asylum policies and is now allowing illegal aliens to disappear into our country, says Homeland Security/Immigration expert John Zadronzy. @JohnZadronzy @FredFleitz pic.twitter.com/585mGJebiH