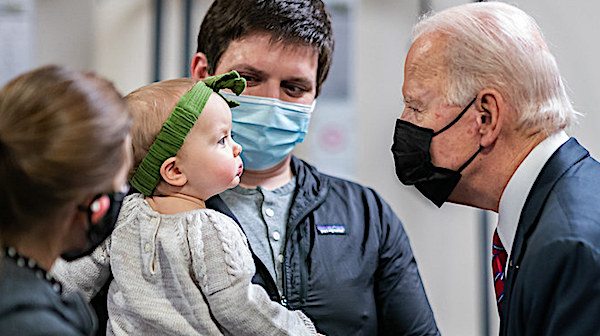 The Heritage Foundation warns that Joe Biden is going for “equity” in America, not “equality.”

The think tank says the Biden administration “is advancing a divisive agenda that will treat Americans unequally by using a redefinition of the word ‘equity.’”

“The administration’s approach will lead to an unequal, color-conscious application of the law. Achieving the numerical proportionalism of ‘equity’ requires coercion, which the proponents of a redefined equity openly support.”

The result will be “division among Americans, not unity,” Heritage says.

The new definition of “equity,” the think tank says, “has been corrupted to mean unequal treatment in order to obtain equal outcomes as measured among racial, ethnic, and gender-oriented groups.”

“Equality” isn’t a legitimate objective, Biden believes, “because it does not produce the desired goal of equal outcomes among categories based on race, sex, ethnicity, or sexual preference.”

Vice President Kamala Harris wrote on Twitter: “There’s a big difference between equality and equity. Equality suggests, ‘everyone should get the same amount.’ Equity, on the other hand, she says, is ‘about giving people the resources and the support they need, so that everyone can be on equal footing, and then compete on equal footing. Equitable treatment means we all end up in the same place.’”

That idea comes from critical race theory, which Britannica states is the view that the law and legal institutions themselves are racist, and race itself is a “social construct” used by whites to take advantage of other races.

Biden already has signed multiple executive orders based on the concept of “equity,” not “equality.”

His belief, Heritage says, is that an “entirely neutral policy that does not discriminate on its face, that is not intended to discriminate, and that does not actually treat individuals differently based on their race, somehow constitutes illegal racial discrimination if it has a ‘disproportionate’ statistical effect among different racial and ethnic groups,”

But an “equity” agenda will “mean violating the Constitution and existing law,” the foundation says.

“The Constitution demands equal treatment. The 14th Amendment, for one, guarantees ‘equal protection under the law.’ Titles VI and VII of the Civil Rights Act of 1964 prohibit discrimination based on race, color, religion, sex, or national origin.”

The “equity” policies do “little” to alleviate poverty and inequality, says the think tank.

“As scholars such as Ron Haskins, Robert Rector, Isabel Sawhill, and others have demonstrated, the real drivers of American poverty—for all racial groups—are the so-called background variables of family structure, educational attainment, and workforce participation.”

But under Biden’s agenda, “any policy that leads to unequal outcomes as measured by category is illegal, no matter how impartially applied or how nondiscriminatory its nature. The disparate impact doctrine, therefore, leads policymakers to seek color-conscious policies in the search of achieving numerically proportional outcomes. This produces policies that are unfair and wasteful.”

Heritage concludes that the only way to achieve the goals of “antiracism” would be coercion, and “proponents” are openly supporting the idea.