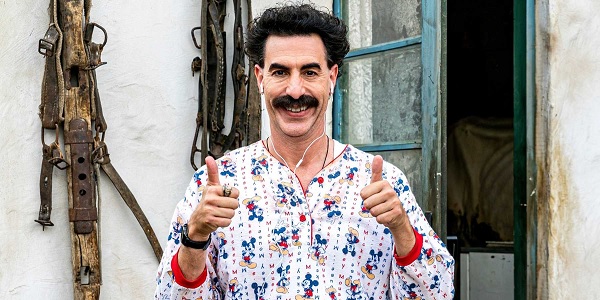 A lawsuit against Hollywood personality Sasha Baron Cohen for allegedly defaming Judge Roy Moore will be heard by the U.S. 2nd Circuit Court of Appeals, according to announcement from Moore’s lawyer, Larry Klayman.

The arguments will be Friday, at 10 a.m.

A lower court dismissed the case, but an appeal has put the case in the 2nd Circuit’s hands now.

Cohen, Showtime and CBS worked together to falsely brand Moore, twice elected to be the state Supreme Court chief justice in Alabama, as a pedophile, the case charges.

WND reported when a lower court decided calling a former judge a “pedophile” was just a “joke.”

It was U.S. District Judge John Cronan who dismissed the case brought by Moore and his wife, Kayla, against Cohen and Showtime for their deceptive behavior when, during a televised interview, Cohen flashed a beeping wand that he claimed could detect “pedophiles” at Judge Moore.

Klayman, the founder of both Judicial Watch and Freedom Watch who represented the Moores, said immediately it would be appealed.

“Judge Cronan’s dismissal was predicted, as set forth in our prior motion to disqualify him from the case. It would appear that he is biased and prejudiced based on Chief Judge Moore’s ideological and religious beliefs, most particularly his opposition to gay marriage,” Klayman said in a statement at the time.

“Judge Cronan’s ruling makes no factual and legal sense, and frankly is outrageous and violation of his judicial oath. He even characterizes what the admitted fraudster Sacha Baron Cohen did, branding my client a pedophile before the entire world, as simply a ‘joke.’ To the contrary, Judge Cronan’s dismissal is the joke, and more than a bad joke at that.”

Cronan admitted that Cohen and his TV company deliberately provided false information to the Moores – they explained that Judge Moore was being given an award in order to get him to appear.

Further, the release that Judge Moore signed before the interview was with a company that doesn’t exist, a deception that many have argued invalidated the agreement.

Cronan claimed, however, that the release was valid and covered all of the implications and innuendo Cohen unleashed against the judge and his wife, who didn’t sign any release. Cronan also said Kayla Moore’s concerns couldn’t be reviewed because of the First Amendment.

The suggestions from Cohen about the Moores came on the show “Who is America,” which was on Showtime.

An earlier judge on the case, Andrew Carter, had decided the other direction. In fact, he had denied motions by Cohen, Showtime and CBS to dismiss.

There were some significant differences in the characterizations of the situation. The defendants claimed Cohen was a political satirist, while the plaintiffs called him a “fraudster.”

Klayman had argued that such differences are for a jury to decide.

The court earlier order instructed Cohen to answer questions about his deception of and insults to Moore, who was seeking $95 million.

Klayman told WND at that time there’s institutional protection for personalities like Cohen.

Cohen falsely portrayed himself as a representative of the since-dissolved company Yerushalayim TV and has claimed that Moore’s consent agreement with that company provides immunity.

However, Klayman has argued that a longstanding contract principle is that “a misrepresentation of material facts” could be used to cancel a contract and that Cohen misrepresented himself, his intent and his plans.

“Whether couched as opinion, humor, or rhetorical hyperbole, which defendants attempt, defamatory statements made by a comedian are actionable where a reasonable listener or viewer could conclude that he or she was asserting or implying false facts about a plaintiff,” Klayman has argued.

That, too, is for a jury to decide, he said.

Moore, who twice was elected to the top judicial post in Alabama, was accused by nine women during his 2017 U.S. Senate run of sexual misconduct when the women were teenagers and he was in his early 30s. Moore has vehemently denied the claims and there is no substantive evidence supporting the women’s claims.