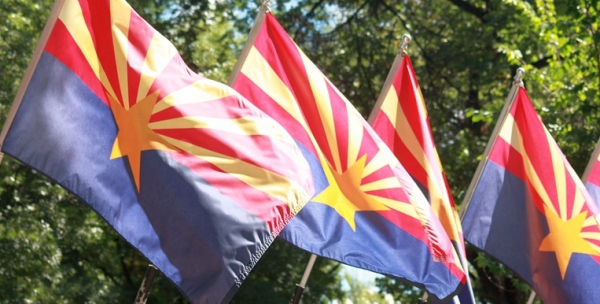 The CEO of a cybersecurity firm hired by Arizona Senate Republicans to audit the 2020 election results in Maricopa County said Friday he found more than 57,000 problem ballots, however his team’s count confirmed that Joe Biden won.

Those mixed results produced contrasting reactions on Friday, with media reporting the five-month, $6 million effort was a waste of taxpayers money while President Trump, Arizona Republican lawmakers and voter-integrity activists pointed to findings that verify their belief that the election was fraudulent.

Ben Cotton, the founder of the digital forensics firm CyFIR, claimed in his presentation to the senators he has evidence that Maricopa County workers intentionally deleted data.

He said his team caught the election workers at the keyboards of computers in February purging results from the Election Management System the day before the audit began.

His team, he said, captured screen shots and time stamps and has identified the workers.

The audience, despite instructions to remain silent during the presentations, erupted in applause when Cotton said he had the evidence.

See Cotton’s claim and the reaction:

“As we’ve stated, staff were conducting the March election & compiling info required to comply w/ Senate subpoena. We have backups for all Nov. data & those archives were never subpoenaed.”

‘If you find it appropriate’
The president of the Arizona Senate, Karen Fann, referred the results of the audit Friday to state Attorney General Mark Brnovich for further action.

She acknowledged the hand count nearly matched the Maricopa County count but spelled out concerns, urging Brnovich to investigate further “if you find it appropriate.” The audit found 99 more votes for Joe Biden and 261 fewer votes for Trump.

Fann said the auditors’ findings “are concerning because they suggest less-than-perfect adherence to Arizona’s standards and best practices.”

The most urgent concerns, she said, are improving the signature verification process, correcting voter rolls, securing vote technology and machinery, and preserving records to ensure transparency.

At the end of the hearing, Fann said she is asking Brnovich “to open up a formal investigation so that he can pursue and seek additional information, additional facts, perhaps get some of these missing things that we were never able to get, verify all this information, and take the appropriate actions of anything that is necessary to do.”

“I have every confidence that he will be doing that,” she said.

The audit has been referred to the Arizona Attorney General for further action. pic.twitter.com/OAeEq5JMk8

On Thursday, Brnovich promised in a statement that he would “take all necessary actions that are supported by the evidence and where I have legal authority.”

“Arizonans deserve to have their votes accurately counted and protected,” he said.

I will take all necessary actions that are supported by the evidence and where I have legal authority.

Arizonans deserve to have their votes accurately counted and protected. https://t.co/KZ8AHqyMmB

Cotton also told the senators Friday that the Dominion counting machines that were analyzed included data from outside of Maricopa County, from South Carolina and Washington state.

See Cotton’s claim of outside data:

He criticized the county for not granting the audit team access to computer routers. The county has insisted that giving access would be a security risk.

Maricopa County repeatedly has stated its vote-counting equipment is never connected to the internet.

In a tweet, the county said Cotton “cannot tell you about the internet connection but we can.”

“The tabulation equipment was never connected to a router or the internet. 2 audits confirmed this.”

Dr. Shiva weighs in
Another 17,000 ballots in Maricopa County should not have been counted because they were duplicate votes, contended Dr. V.A. Shiva Ayyadurai, an MIT-trained data analyst hired by the Senate Republicans.

He said there were ballots that eventually were double or triple counted that had a “verified and approved” stamp pre-printed on the front. Among the examples he presented was a ballot that was stamped as approved even though it didn’t have a signature.

However, Ayyadurai, who was a U.S. Senate candidate in Massachusetts last fall, said he didn’t “want to accuse” officials of fraud. Instead, he called for a “full signature verification audit.”

Reacting to his presentation, the county said on Twitter that election officials contacted voters who mailed ballots in an unsigned envelope. The county insisted that “only one ballot [from each voter] is counted.”

‘Obstruction from the county’
In opening remarks, Arizona Senate Judiciary Chairman Warren Petersen said the report was incomplete because the county failed to cooperate and obstructed the audit.

“This is the first time in the history of country that an audit of this scale and magnitude has ever been conducted,” he said. “It’s unfortunate that it is an incomplete audit due to the lack of cooperation and obstruction from the county. However, in spite of that, this is still the most complete audit that has ever been done.”

After hearing the evidence, state Rep. Mark Finchem, a candidate for Arizona secretary of state, called “for decertification of the Arizona election, arrest of those involved in tampering with election systems, and an audit of Pima County as a next step.”

Arizona state Sen. Wendy Rogers said 41 legislators from multiple states have written a letter calling for a 50-state audit, “decertification where appropriate” and possible convening of the U.S. House of Representatives.”

41 Legislators from Multiple States Write a Letter to the American People Calling for a 50-State Audit, Decertification Where Appropriate, and Possible Convening of the US House of Representatives pic.twitter.com/Hoz6zUBtZq

After Dr. Shiva Ayyadurai’s opening presentation, former President Trump said the audit “was a big win for democracy and a big win for us” that “shows how corrupt the Election was.”

He accused “CNN, New York Times, Washington Post, and other Lamestream Media” of “feeding large-scale misinformation to the public about the Arizona Audit.”