Biden accused of being master at 'alienating' friends 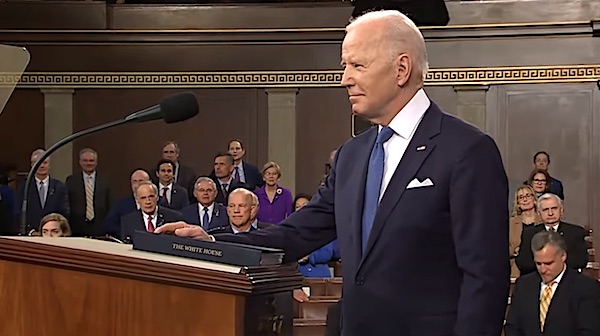 Joe Biden is being accused of a deliberate strategy that alienates America’s friends, and it’s being driven as least partly by his “personal vendetta” against President Trump, according to an analysis by the editor of a Saudi daily publication.

The Middle East Media Research Institute explained Faisal ‘Abbas, editor of Arab News, the leading Saudi English-language daily, noted “sarcastically,” that “if American author Toby Young ever wanted to write a sequel to his book ‘How to Lose Friends & Alienate People,’ he would find a rich vein of content in U.S. President Joe Biden’s foreign policy.”

MEMRI explained the editor found a “blatant example” in Biden’s “eagerness to appease Iran in order to renew the nuclear deal.”

His strategy on that front includes removing the terroristic Islamic Revolutionary Guard Corps in Iran from America’s terrorism list.

“Declassifying the IRGC simply to obtain a new agreement would be the equivalent of trying to put out a fire by spraying it with aviation fuel,” ‘Abbas wrote.

MEMRI explained, “‘Abbas notes that this anticipated decision regarding the IRGC comes in the wake of Biden’s earlier decision to remove the Houthis in Yemen from the terrorist list – a move that only emboldened this Iran-backed militia to increase its attacks on America’s allies, Saudi Arabia and the UAE. He stresses that the American disregard of the Houthis’ attacks, such as their repeated attacks on Aramco oil facilities, is the root cause of the energy crisis currently afflicting the world. All industries and individuals who are suffering from this crisis should realize that ill-advised foreign policy is responsible for their plight.”

But ‘Abbas contended the “most blatant example of America’s misguided foreign policy” is Biden’s actions regarding Ukraine.

“The Obama administration, he states, prepared the ground for this crisis by letting Russia get away with the annexation of Crimea in 2014, and now the Ukrainians have to beg the U.S. for help in confronting the Russian invasion.”

‘Abbas continued, “At the heart of the Biden administration’s zeal for the deal in Vienna is a personal vendetta against his predecessor, Donald Trump. That vendetta, along with internal political squabbling, also led to the delisting of the Tehran-backed Houthi militia as a terrorist group in early 2021 — reversing the Trump administration’s laudable action before he left office.”

“In response, the Houthis, who overthrew Yemen’s internationally recognized government in 2014, have ramped up their deliberate targeting of civilian facilities in Saudi Arabia and the UAE. Instead of reconsidering its position, the Biden administration doubled down on its apparent strategy of alienating friends.”

He said Biden has not even taken “the minimum, zero-cost decision to re-list the Houthis as a terrorist group, despite their blatant attacks at the weekend on Aramco facilities in Saudi Arabia at a time when global energy supplies are already being disrupted and accompanying price increases are troubling the world. Saudi Arabia was therefore absolutely right to say, as it did on Monday, that it could not be held responsible for any oil supply issues resulting from these Houthi attacks.”

The editorial, which also suggested those in Saudi Arabia, Afghanistan and Israel all have reason to distrust Biden, continued, “Indeed, from Toronto to Tokyo, truck drivers, airlines, cargo ships, hospitals and almost every other industry and individual affected by Biden’s ill-advised foreign policy should remember that the economic pinch they feel is on him.”