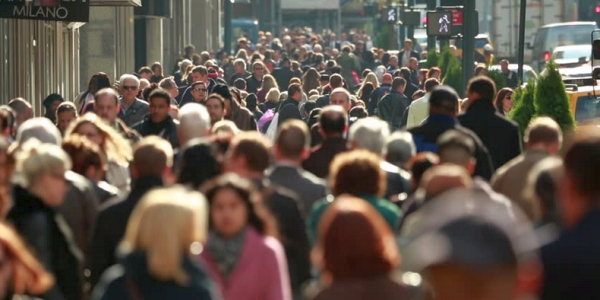 President Biden’s failure to make clear statements – for years he’s been known for his “gaffes” – now have hit a new high mark. Or marks.

He’s committing mistakes even though he’s reading from written notes that are prepared ahead of time. And he’s repeating them.

Watch, as he claims that 350 million Americans – virtually the nation’s entire population – has been vaccinated. And does it again.

The Gateway Pundit exclaimed, “Joe Biden falsely claims – TWO TIMES IN A ROW – that 350 million Americans have been fully vaccinated…”

“As usual Joe Biden struggled to read his own notes because … of his cognitive decline.”

Biden said, “We have uh roughly 350 million people vaccinated in the United States and billions around the world.”

Then he added, ““I said, well over… what’s the number again? I have to remind myself.. 350 million Americans have already been vaccinated.”

Actually about 160 million Americans have been vaccinated, half the population.

He’s moved to reading from notes to try to avoid mistakes, which is a practice that itself created an embarrassing moment just days ago when someone handed him a note that there was something on his chin, and he held the note for all to see.

Here he is relying on written instructions:

The situation has gotten so bad that Republican Rep. Ronny Jackson of Texas, who was a White House physician for former presidents George W. Bush, Barack Obama and Donald Trump, said there’s “something going on.”

Jackson last month joined fellow Republicans in urging Biden to be tested for cognitive decline, saying the issue grows more urgent with every day. President Trump took a cognitive exam while he was in office and scored 30 out of 30.

The U.K. Daily Mail said Biden looked “confused” during a visit to a Michigan pie shop. “I think he’s demonstrating every single day that there is something going on,” Jackson said. “You don’t need to be a physician to look at this behavior and see there’s something concerning happening.”

Jackson said Biden’s condition is more serious than a continuation of the gaffes that are a hallmark of Biden as a politician.

“You can go back – there’s 40 years of tape of this man – he’s always made gaffes and stuff but these are different, he’s confused, he’s disoriented,” Jackson said.

He told the Western Journal the issue is not that Biden is aging, but how he is aging.

It was the Daily Mail in the United Kingdom that recently posted as its top story the question, “Are you ok, Mr. President?”

“Biden loses this thoughts on vaccines, flubs answer on his foreign policy work and falsely tells town hall you WON’T get COVID if you have the shot,” the publication proclaimed.

It quoted Biden saying, “The experts say we know that this virus is, in fact, uh, um, uh, it’s going to be, or excuse me.”

He said no one vaccinated will be sent to the ICU or die, and he “repeatedly gave confusing, misleading and non-linear answers when discussing masks, national security issues and COVID-19 vaccine approval.” the report said.

The Mail said the town hall was “gaffe-filled” and quoted Biden’s assurance that “You’re not going to – you’re not going to get COVID if you have these vaccinations.” But it explained that statement is “false.”

“Biden struggled at some points during his town hall to complete statements coherently as he lost his train of thought on multiple occasions,” the report continued, noting that Republicans also were reacting negatively to Biden’s fumbles.

“Is this for real?” was the comment from Republican Conference Chairwoman Elise Stefanik.

Talking about vaccines for children, the president rambled: “That’s underway, just like the other question that’s illogical. And I’ve heard you speak about it because you always – I’m not being solicitous – but you’re always straight up about what you’re doing. And the question is whether or not we should be in a position where you uh, um, are – why can’t the, the, the experts say we know that this virus is, in fact, uh, um, uh, it’s going to be – or, excuse me, we, we, we know why all the drugs approved are not temporarily approved by permanently approved. That’s underway too. I expect that to occur quickly.”

He took off on another tangent: “There are trusted interlocutors. Think of the people — if your kid wanted to find out whether or not there were — there’s a man on the moon, or whatever — you know, something, or, you know, whether those aliens are here or not — you know, who are the people they talk to beyond the kids who love talking about it? They go to people they respect, and they say, ‘What do you think?’”

“And I’ll say one last thing: You’re going to – I’ve had a lot of experience internationally and – I mean, not good or bad, just I have – I chaired the Foreign Relations Committee, I’ve been deeply involved. I did national security for our last – the administration with Barack. ‘But folks, the rest of the world’s wondering about us. Those of you who travel abroad, it’s not a joke. Not a joke. ‘Ask — you know, when I went to this G7, all the major democracies. I walked in and go, ‘America’s back.’ I’m serious, heads of state. I give you my word as a Biden. They said, ‘Are you really back?’”

Saturday Night Live has noticed to the point of creating a video making fun of the situation.

At one point the Washington Post found at least seven falsehoods in a “fact-starved” story about war.

Biden’s gaffes, blunders and bloopers so often that there’s even a book, “Bidentime,” about them.

Just days ago, he boasted of having driven an 18-wheeler, a tale quickly debunked as being imaginary.

Joe Biden, a career politician who has been in politics for 48 years, claims he “used to drive an 18 wheeler.” pic.twitter.com/eOXI9pwF2g

The Washington Examiner reported the Republican National Committee immediately fact-checked Biden, with Zach Parkinson on social media: “There is *zero evidence* that Biden ‘used to drive an 18 wheeler,’ The extent of Biden’s trucking experience is that he **rode in** a truck once, for one night in 1973 (he made sure to return home by plane though).”

Parkinson cited a December 1973 opinion piece where Biden, as a senator, told of taking a 536-mile ride in a “47,000 pound cargo truck” to learn more about the plight of truck drivers.

The extent of Biden’s trucking experience is that he **rode in** a truck once, for one night in 1973 (he made sure to return home by plane though) https://t.co/p9sPMU20W3 pic.twitter.com/A7tmkoOSHB