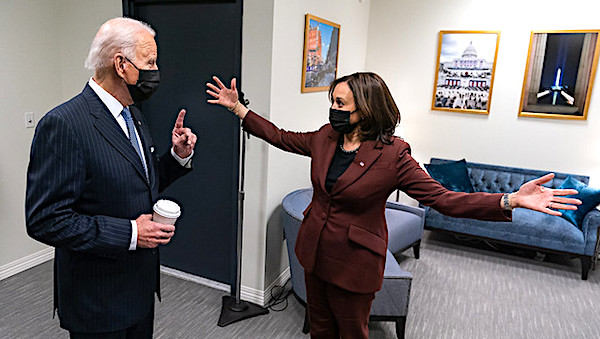 Few observers think the Biden-Harris administration won’t be compromised by family members at some point.

After all, Joe Biden’s son, Hunter, already is under federal investigation, and a message from his abandoned laptop regarding a Chinese business deal indicates a percentage was set aside for the “big guy,” which a business associate identified as Joe Biden.

Further, Biden’s brother Frank has been promoting his relationship to the president in his business operations.

Now, the Washington Examiner reports, a niece of Vice President Kamala Harris, Meena Harris, 36, has been engaged in “diplomacy” that has drawn attention in India.

Through social media, she’s called for the release of political activist Nodeep Kaur and has supported Indian farmers locked in a confrontation with Prime Minister Narendra Modi’s government.

She recently called India’s government “a dictatorship,” which could, according to the report, “complicate U.S. efforts to strengthen ties with India, one of Biden’s pledges.”

Brett Bruen, the White House global engagement director for the Barack Obama administration, said her actions could “seriously complicate our diplomacy with Delhi.”

The changes addressed by Modi have been endorsed by the U.S. State Department.

“Family members weighing in on foreign policy has always been a big no-no,” Bruen warned. “It creates the impression that they can exert undue influence on the process and also opens up major vulnerabilities for our national security as countries and groups will target them to try and advance their particular policy goals.”

Biden, meanwhile, in a phone call this week with Modi, pledged “close cooperation.”

The Examiner said the administration “has sought to tamp down speculation about family members profiting off of their ties to the country’s highest officeholders.”

“Biden’s son Hunter has come under fire, including for a newly announced book, as have Biden’s brothers and his son-in-law, a medical entrepreneur,” the Examiner said.

Meena Harris’s company, Phenomenal, sells and markets products “that make apparent reference to her most famous family member, and she has published two bestselling books, including one named after her mother Maya and aunt Kamala,” the report said.