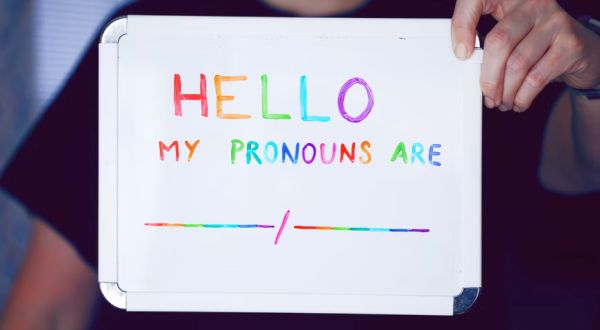 A fight has erupted in a Wisconsin school district because officials have accused a couple of eighth-grade students of “sexual harassment” for using feminine pronouns regarding a female classmate, over her demand to be addressed by “they/them.”

WND reported that the Wisconsin Institute for Law & Liberty has written to the school explain that using “biologically correct pronouns not only does not constitute sexual harassment … it is speech protected by the First Amendment.”

Joe Biden, however, apparently doesn’t want such cases shut down – but wants them expanded to every state, according to a report in The Federalist.

“If Biden and his Democrat allies get their way, every public and charter school across the country will, instead of educating kids, be pouring their allotted taxpayer dollars into investigating the ones who don’t subscribe to the left’s orthodoxy on wrong pronouns or who accidentally use a student’s correct pronoun instead of their ‘preferred’ false pronoun,” explained the report, by Kylee Zempel, an assistant editor.

WILL Deputy Counsel Luke Berg explained in the report it’s that Biden is pushing to have “sex” in federal redefined to include “gender identity” and the like.

That, of course, presumes that lawmakers 50 years ago when writing the Civil Rights Act intended to identity “sexual orientation” and “gender identity” as protected classes under the federal law.

Berg said Biden’s push for the redefinition stems from the Supreme Court’s “erroneous” decision two years ago to create a right to same-sex “marriage.”

In his first day in office, actually, Biden ordered that the Department of Education redefine “sex” to include the LGBT agenda.

The report explained that in the Wisconsin case, “mispronouning” doesn’t even qualify as sexual harassment under the district’s own policies, which generally address stalking, date violence, unwanted touching and the like.

Supt. Brad Ebert told the parents he was just following state and federal laws regarding bullying and harassment.

The Federalist, however, pointed out, “The school, however, flouted its policies and Title IX from the very start. Although both require the school to notify the accused about the allegations before starting an investigation so the student has ‘sufficient time to prepare a response before any initial interview,’ the district gave only a vague, one-page notice a day before seeking to interrogate the boys, letting them know simply that they were accused of ‘using incorrect pronouns.’ According to WILL, the district began its investigation and conducted interviews without giving the students and their parents any more information or time to prepare.”

The report explained the Wisconsin school brought cases against three boys, and two now are being homeschooled.

The Federalist report included a warning, “This story is a preview of exactly the kind of routine hostility we can expect for students all over the country, First Amendment be damned, if Biden and his bureaucrats successfully write ‘sexual orientation’ and ‘gender identity’ into the meaning of ‘sex’ in education.”