Biden's boasts about cutting deficit include only half the information 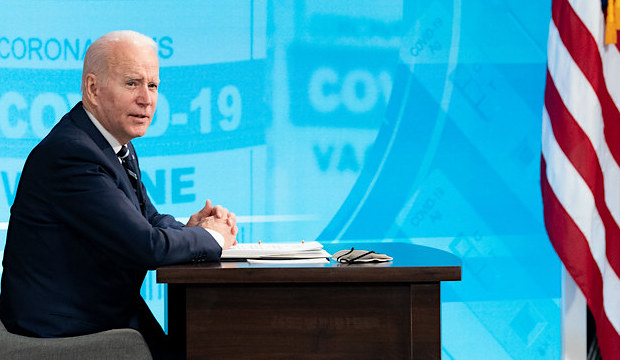 Joe Biden has been boasting of late about the government being on track to cut the nation’s deficit by $1.5 trillion by the end of the fiscal year.

He’s insisting that’s the “biggest decline in the singly year ever in American history.”

But he’s leaving out fully half of the information needed to put that in perspective, advises a new report from the Washington Examiner.

That’s because it was Biden’s own spending that exploded the deficit in 2021, a level from which now the nation is receding, the report quotes experts explaining.

“The deficit is falling by $1.5 trillion, that’s not the same as saying the president is cutting the deficit by $1.5 trillion,” Marc Goldwein, of the Committee for a Responsible Federal Budget, told the publication.” “One reason it will fall so much between 2021 and ’22 is because the president signed legislation that increased it so much in 2021.”

He and other critics suggest Biden’s claim simply isn’t the truth, because it reflects the “historically high deficit” on $2.8 trillion – achieved at least in significant ways by Biden’s own spending.

One of the big reasons for last year’s deficit explosion was Biden’s own $1.9 trillion American Rescue Plan. No Republicans supported that level of government largess.

Goldwein told the Examiner that’s a “big reason” for the high deficit then.

And he faulted Biden for not including the full perspective.

“It’s kind of bizarre to take credit for deficit reduction when it’s driven by the expiration of your deficit increases,” he said.

Even coming down from that surge in spending, this year’s deficit, the one that Biden’s bragging about, likely is to be “the fourth-largest in American history,” the report said.

It easily outpace the $900 billion figure from 2019, The Examiner said.

Over the last year, the American economy, coming out of the Democrat-ordered shutdowns that collapsed much of the nation’s business during the pandemic from the China virus, COVID-19, has restored a 3.6% unemployment rate and job growth continues.

However, Biden’s policies have allowed inflation in the range of 9%, creating a crisis situation for those with lower incomes who are faced with paying $4 or $5 a gallon for gasoline and surging food costs.

The Biden administration response has been for the Federal Reserve to start raising interest rates significantly – to combat inflation – but at the same time delivering a second blow to the lower and middle income families who have anything financed because of much higher monthly payments.

The GDP also is reported shrinking, down 1.4% in the first quarter.

Even one of Biden’s advisers now has been admitting that a recession could be coming.