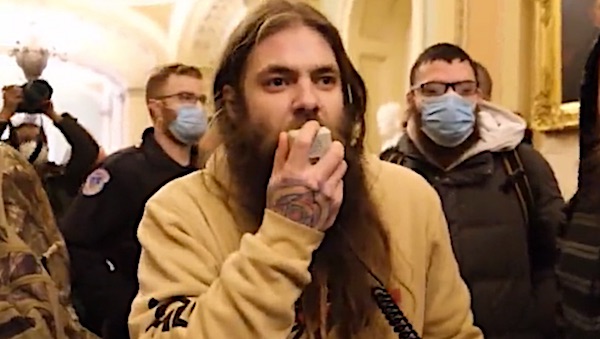 Democrats ever since the day have claimed that the Jan. 6, 2021, riot at the U.S. Capitol, where one unarmed protester was shot and killed by police and several people died from other health conditions, was seditious and an “insurrection,” a true attempt to overthrow the United States government.

Essentially it was a riot, a faction of fans of President Trump, who had held a rally early that day, who got out of hand in their efforts to persuade Congress to let multiple states fully review their ballots from the presidential election before giving the White House to Joe Biden.

That’s a strategy that earned both support and condemnation among those in the legal community, but since then, Americans have learned that there were multiple improper outside influences on those election results which likely turned the count from Trump to Biden.

Those include that Mark Zuckerberg handed out $420 million to influence local election officials, who used the money essentially to set up Democrat get-out-the-vote offices, legacy and social media suppressed accurate and damaging reports about the Biden family’s international business schemes, and various election officials simply ignored their own laws about mail-in ballots.

But Democrats were incensed that anyone would question the results that came out of Zuckerberg’s huge investment in the election, and jumped on the riot as evidence that the events essentially were a Civil War II.

And now a report at American Greatness reveals they are threatening those arrested for that day with sentences of life in prison.

Julie Kelly reported at the web site that federal prosecutor Kathryn Rakoczy stated, “The United States takes the position that the most analogous offense to seditious conspiracy is ‘Treason.’”

That’s from a letter Kelly obtained, in which the Department of Justice is trying to intimidate Jan. 6 defendants – whose charges generally range from being in a federal building without permission to vandalism – into accepting plea deals.

Kelly reported that the focus is a number of defendants who are part of the Oath Keepers organization.

Their charges, among the most serious of all of the hundreds of cases, involved “seditious conspiracy.”

Three have pleaded guilty, nine have rejected the coercion.

Rakoczy warned the defendants that the government “could seek a life sentence upon conviction.”

Most of the defendants in the various charges have been convicted by juries, but there was at least one case dismissed already.

Kelly explained, “The Oath Keepers are not accused of carrying or using any weapons on January 6; none is charged with directly vandalizing government property. Two ‘stacks’ of Oath Keepers entered the building after the joint session of Congress recessed that afternoon and walked through open doors with police nearby.”

But Rakoczy insisted on furthering threatening the defendants with “a terrorism enhancement” for any guilty verdict.

Even as the government charges forward in its attack on protesters, the report said, it has failed to provide all of the documentation and information about the situation that it was legally obligated to give the defendants, including details about a “federal informant” that was in the group.

The trial for the first of the case defendants now is scheduled for September. They all have been held behind bars without bail, on demands from prosecutors, since early 2021.

One of the defendants who pleaded guilty, Joshua James, is a Purple Heart veteran who nearly died from a bomb explosion in Iraq, and he did so under the prosecutors’ threat to eliminate his veterans benefits.

The Gateway Pundit describe the threats as “pure evil.”

“Several members of the Oath Keepers, who were in Washington DC only to provide protection to speakers at the several organized protests that week, walked into the US Capitol. They were seen taking pictures inside the building,” a commentary explained. “Now the Biden Department of Justice, under the direction of Matthew Graves, the US Attorney for the District of Columbia, are threatening those same men with life in prison.”