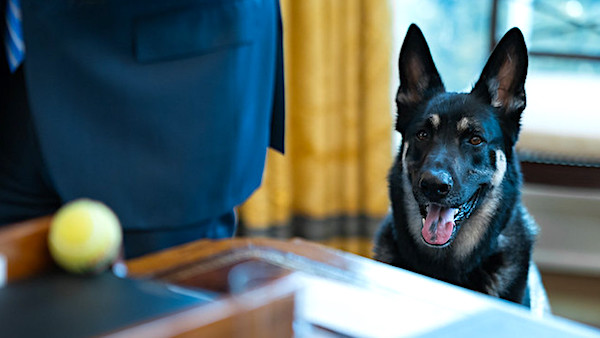 There were a numbers of stories back when Joe Biden first moved into the White House about his dog, Major, biting people.

The official claims by his administration were that the dog “nipped” someone first, and that was because the animal was “still adjusting to his new surroundings.”

Then he bit another, and a White House employee was taken to a medical unit for treatment.

Finally, when the government declined to release details that should be available to the public, the Washington watchdog Judicial Watch filed a public records lawsuit over the fracas.

Now the organization has obtained hundreds of pages of records and what they reveal is an animal that was dangerous to nearly any new person it encountered while living at the White House.

“These documents show Major was a dangerous dog and the Biden White House lied about it, placing Secret Service and other White House personnel at needless risk,” said Judicial Watch President Tom Fitton.

“And it seems the Secret Service management seemed more concerned about managing press relations than taking care of its agents. In fact, the agency is still withholding information about this mess!”

The report revealed the Bidens got rid of the dog eventually, giving it to friends in December 2021.

But the watchdog reported before that move, the dog was involved in “multiple attacks and damages caused to United States Secret Service members.”

One of the federal employees who was hurt also was “displeased” that White House Press Secretary Jen Psaki “misled the press about the incident.’

The documents were turned over under a FOIA lawsuit.

“In an email chain dated March 9, 2021, a member of the Presidential Protective Division (PPD) expresses their anger that White House Press Secretary Jen Psaki lacked candor about the dog bite incident during a press briefing. The chain begins when a fellow agent checks on the welfare of a colleague asking, ‘You ok? Someone told me you got bit.’”

The responder said, “Yes I got bit by Major on [redacted] and NO I didn’t surprise the dog doing my job by being at [redacted] as the press secretary just said! Now I’m pissed. Thanks for checking in.”

There was an “incident report” from the Secret Service regarding at attack on Feb. 28, 2021, by the dog while at one of Biden’s multiple homes, the one in Wilmington, Delaware:

Shortly after, a Secret Service official wrote about adding the “Uniformed Division” to the email chain, “as I understand there have been multiple bite/attack incidents involving Major and their officers.”

Yet another incident was shortly later at the White House when Major attacked and tried to bite a special agent, whose evasive maneuvers meant the dog only bit – and tore – his coat.

A claim later was submitted for the cost of the coat, more than $500, but it was then withdrawn by the agent, who said the taxpayers shouldn’t have to bear such costs, and that it was the liability of the dog’s owners.

Then there was a note warning, “We have noticed Major getting more aggressive lately. We have extended the offer of our K9 trainer (RTC Training Facility) to help train Major.”

Jill Biden’s office responded that, “She [redacted]. The dogs are en route Delaware.”

A high concern that was revealed was the worry about the press coverage, according to Judicial Watch.

“Family pets are both in Wilmington. Younger pet bit a Shift SA [special agent] yesterday. Staff/first family are getting him a full time trainer to correct his behavior in Wilmington.… The biting incident is in the news now (Google it). Just another reminder that the press is always looking for a story. Maintain awareness of your conversations and social media presence. We do not want and cannot have a press lead attributed to us.”