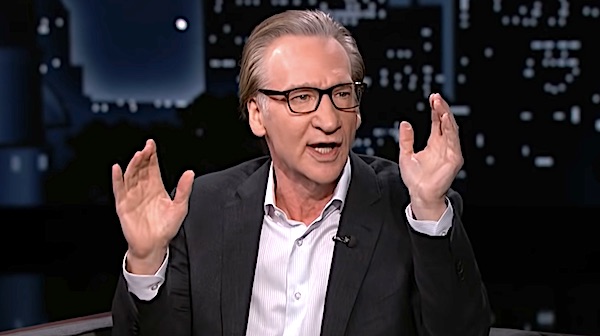 Although he lives in California, media veteran and well-known leftist Bill Maher is predicting California residents will eventually turn against the Democratic Party for its failure to solve serious problems in the Golden State.

During a recent appearance on “the Adam Carolla Show,” Maher said “we know there’s been an exodus from this state. That’s partly because of high taxes and it’s partly because fire season is all year round. It’s also because people can’t f***ing do anything.”

The host of “Real Time” explained so many people are saying “f*** it” about “so many things out here.”

“Eventually, what they are going to say is ‘then f*’* it to the Democratic Party.’ This is an Achilles heel to this party that they have to come to terms with. I mean, they couldn’t build a railroad, they tried, from L.A. to San Francisco. Same thing with the housing, the homeless thing.”

“There are just too many people with their hand out. There are too many people who are unnecessary in this equation. This is kind of beyond politics, and it will get hung on, deservedly so, on the Democrats because they run this state.” WATCH THE VIDEO (NOTE: GRAPHIC LANGUAGE THROUGHOUT):

Why has there been an “exodus” from California, according to @billmaher?

“Partly because of high taxes,” “partly because fire season is all year round,” and “because people can’t f*cking do anything.” https://t.co/uN7jODfCKK pic.twitter.com/4jC9PGvpYd

Both Maher and Carolla voiced their personal frustration about inhibitive rules for residents in California, pointing out the maddening hurdles of getting solar panels installed at home.

He noted, “All the regulations that, I mean, I don’t know if it’s Orwellian, or Kafka-esque, or both of them, but it’s just strange. Very strange. The hoops you had to jump through to do something that the state was advising you to do. Solar power was something – I thought I was being a good citizen trying to hook up.”

Maher made similar complaints during an interview with U.S. Rep. Adam Schiff, one of the impeachment managers against former President Donald Trump.

“Look, I came out here in 1983. I found paradise. I love California. I do. I don’t want to leave, but I feel like I’m living in Italy in the ’70s or something. Super high taxes, potholes in the road, fires. I don’t know what I’m getting for my super-high taxes.”