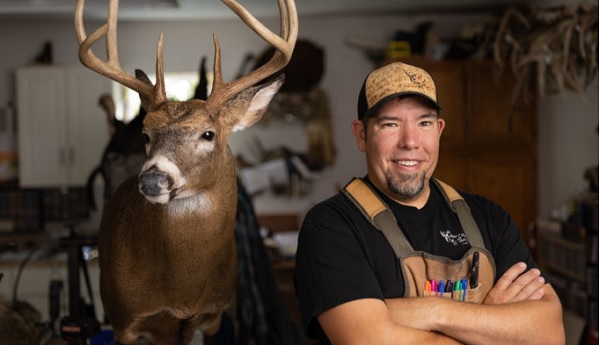 A program in the state of Ohio that purported to allow warrantless inspections of small businesses was killed after a business owner sued over the apparent constitutional violation.

WND had reported earlier when taxidermist Jeremy Bennett declined to let a state inspector into an area of his business that was closed temporarily, and then was prosecuted by the state, so he sued.

Now the case against Bennett has been closed and the state has reimbursed him $5,000 for the costs of defending against the “bogus” claim.

The Institute for Justice confirms that Bennett dismissed his federal lawsuit against the Ohio Department of Natural Resources after the case resolution was reached.

The state agency “removed” its rule allowing the warrantless inspections and further, “compensated Jeremy for his troubles.”

“People don’t lose their Fourth Amendment right when they open a business,” said IJ Attorney Joshua Windham. “Before we filed this case, ODNR’s regulation gave state game wardens virtually unlimited power to enter people’s private shops – without consent or a warrant – and spend hours snooping around. That regulation squarely violated the Fourth Amendment, and we’re delighted that Ohio has abandoned it.”

The case developed because during peak hunting season, Bennett closes the taxidermy part of his shop and works solely on deer processing.

“After inspecting Jeremy’s deer processing area for an hour in December 2020, a game warden asked to enter the closed taxidermy area. Jeremy asked him to return in a few weeks when he had resumed working on taxidermy, and the officer left without objecting. But a few months later, Jeremy was criminally prosecuted and threatened with jail time for “refusing” a warrantless inspection of his taxidermy shop,” the IJ reported.

Despite the fact he knew the state was wrong, and because of the cost of an extended legal battle, Bennett initially pleaded no contest and paid a fine of $150.

Then he coordinated with the Institute for Justice on his federal legal action, through which the state agreed to compensate him $5,000, just about the fees incurred “while defending himself from the bogus prosecution.”

“I’m glad that I was able to make changes that apply to every Ohio business required to keep records by ODNR, not just my own,” said Bennett. “For too long, Ohio taxidermists and deer processors have been subject to search at any time. But the new regulation requires these officers to seek our consent or get a warrant before entering – which means our constitutional rights as private property owners are respected. Accomplishing this for everyone is a tremendous feeling.”

The state agency months ago changed its direction, with a formal directive requiring wildlife officers to obtain consent or a warrant for a search.

It then was formally codified.

“The Institute for Justice and Jeremy have brought Ohio’s ‘anywhere, anytime’ inspections to an end for the state’s taxidermists and deer processors – but too many innocuous businesses still suffer from intrusive, warrantless searches and seizures,” said IJ Senior Attorney Robert Frommer, who directs IJ’s Project on the Fourth Amendment. “We will keep pushing back against rogue government agencies that try to force entrepreneurs to give up their right to be secure simply to operate their business.”