'Cheap shot': Obama at war with own presidential doctor over Biden 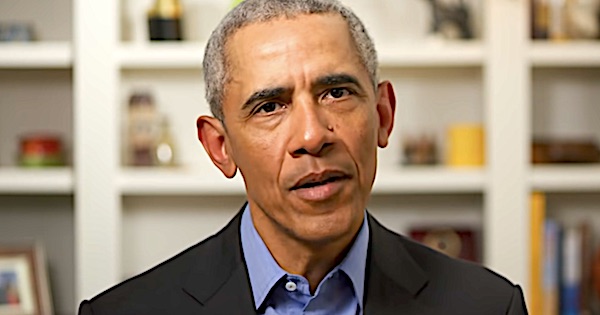 Barack Obama’s former White House physician, now a congressman, has detailed in his new book how the former president described his concern over Joe Biden’s nutty statements as being “unprofessional.”

The book is “Holding the Line: A Lifetime of Defending Democracy and American Values,” by U.S. Rep. Ronny Jackson, R-Texas.

He is a doctor and formerly served in the administrations of George W. Bush, Obama and Donald Trump as White House physician.

According to a Fox News report about the book, Jackson had expressed concern over the “crazy statements” and mental lapses Biden was exhibiting during the 2020 campaign.

Biden long has been known for his verbal gaffes – once telling a paralyzed supporter to stand up so the crowd could see him. But the statements during the Biden campaign were causing Jackson concern.

“Biden was on TV again, making crazy statements and concerning mental gaffes; he didn’t know what state he was in or what office he was campaigning for,” Jackson explained about the 2020 events. “He apparently thought at one point that he was running for the Senate and later couldn’t remember what state he was campaigning in. This had been going on for moths and was getting worse.”

He also suggested that Biden could benefit from taking a cognitive test, like the one Jackson saw administered to President Donald Trump.

On social media, he posted a video of one of Biden’s many “cognitive misadventure” events and said, “Remember the cognitive test that I gave @realDonaldTrump? The one he aced! Sounds like somebody else might need some testing done!! Scary!!”

Fox explained, “Within 20 minutes of that tweet, Jackson received a ‘scathing’ email from President Obama.”

Obama scolded, “I have made a point of not commenting on your service in my successor’s administration and have always spoken highly of you both in public and in private. You always served me and my family well, and I have considered you not only a fine doctor and service member but also a friend.

“That’s why I have to express my disappointment at the cheap shot you took at Joe Biden via Twitter. It was unprofessional and beneath the office that you once held. It was also disrespectful to me and the many friends you had in our administration. You were the personal physician to the President of the United States as well as an admiral in the U.S. Navy. I expect better, and I hope upon reflection that you will expect more of yourself in the future.”

Jackson, however, was “uniquely qualified” to express concern over Biden’s fitness, “having served as the White House physician to Presidents George W. Bush, Obama and Donald Trump,” the report explained.

The media, in fact, had accused Trump of being unwell mentally many times, and in 2018, openly mocked Jackson for revealing that a cognitive test showed Trump was in “excellent” mental shape.

“Trump never made crazy statements like the ones Biden was making almost every day,” Jackson wrote, “but these people were jumping up and down: ‘He’s not fit to be president; he needs a cognitive test!’”

Jackson explained he decided not to respond to Obama’s scold.

“So, upon reflection, I thought, You know what? Screw that guy! I’m not doing it,” Jackson wrote. “I just walked away from it, which was the last time I had any contact with [Obama].”

Jackson told Fox News Digital of the irony involved, “considering [Biden’s mental fitness] is all anyone, including the liberal media, can talk about.”

He said, “Let it be known, as the White House physician for the last three presidents, I was the first to say that we have a serious problem with this man’s cognitive demise, and he will not make it four years in office. I’ve always said there would come a point where it wouldn’t be just me talking about it, but his own party, and sadly, that has proven to be the case. Joe Biden’s cognitive failures are on full display for the whole world to see.”

WND had reported on the tongue-lashing from Obama earlier.

At the end of 2021, WND reported the email from Obama had been revealed in a report by Paul Bedard at the Washington Examiner.

That was when Jackson appeared with Rep. Jim Banks, R-Ind., on Banks’ podcast.

At the time, Jackson described Obama’s demanding instructions as “unbelievable.”

He said he could readily see what was happening to Biden – just like other Americans. It was about the time Biden, who repeatedly has lost his train of thought and left sentences unfinished, wandered aimlessly out onto the lawn of the White House while Secret Service agents scrambled.

Biden also has forgotten where he was, forgotten the names of his appointees, mixed words and flubbed lines. Recently there have been several instances where he’s revealed inadvertently the detailed instructions his staff gives him, such as to enter a room and then sit down.

Rep. Ronny Jackson (R-TX), who was Obama’s White House doctor, says that Biden needs to resign because he is no longer “cognitively prepared to be our president.” pic.twitter.com/QNwmeXkFhU

Biden’s verbal stumbles and blunders long have been viewed as simple “gaffes.” A poll from earlier this year showed majorities of Americans believe Biden to be incompetent as president, and they wanted him to take a cognitive test and release the results.

A more recent poll said two-thirds of Democrats are done with Biden, insisting the party pick another candidate for 2024.