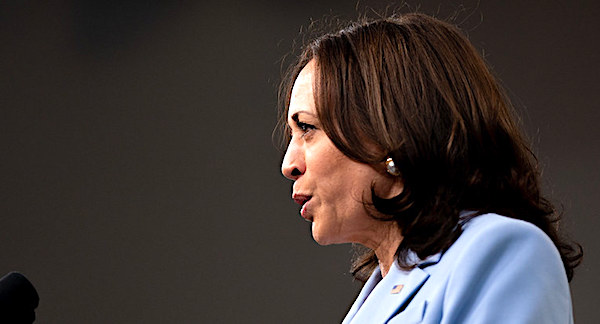 Political reports reveal that hundreds of Virginia’s black churches are expected, in the coming few days, to show a video recorded by Kamala Harris touting leftist Terry McAuliffe in the state’s race for governor.

And there could be trouble over that. Trouble for the churches that conceivably could lose their tax-exempt status.

It’s because federal law says, as non-profits, they must not “participate in, or intervene in (including the publishing or distributing of statements), any political campaign on behalf of (or in opposition to) any candidate for public office.”

“If this is indeed played in churches (as opposed to simply posted on internet sites), it does appear a premeditated and unambiguous violation of the federal law governing churches as non-for-profit institutions,” charged Jonathan Turley, a nationally recognized legal scholar who known as a constitutional expert and frequently provides commentary on issues in the news.

He’s also a professor at George Washington University and has served as counsel in some of the best-known cases of recent years, including representing at the Rocky Flats grand jury in Colorado, and representing Area 51 workers.

The issue is Harris’ video:

NEW — More than 300 Black churches across VA will hear from @KamalaHarris btwn Sun. and November 2 in video message that will air during morning services as part of outreach effort aimed to boost @TerryMcAuliffe.#VAGOV

She and other progressives are pulling out the stops to boost McAuliffe in his race against businessman Glenn Youngkin because polls show the race to close to call, where McAuliffe had counted on an easy victory.

The Washington Examiner said Harris’ move “has raised eyebrows regarding the legality of bringing political campaigns into house of worship.”

The report said Harris’ video is “only one part of McAuliffe’s religiously minded ‘Souls to the Polls ‘ media blitz.”

Turley wrote, “The problem is the ‘Johnson Amendment’ makes such political pitches in churches a violation of federal law. Making matters worse, this knowing violation occurred just days after the filing of a complaint against White House Press Secretary Jen Psaki for clearly violating the Hatch Act in using the White House press room to support McAuliffe.”

Corporations, and any community chest, fund, or foundation, organized and operated exclusively for religious, charitable, scientific, testing for public safety, literary, or educational purposes, or to foster national or international amateur sports competition (but only if no part of its activities involve the provision of athletic facilities or equipment), or for the prevention of cruelty to children or animals, no part of the net earnings of which inures to the benefit of any private shareholder or individual, no substantial part of the activities of which is carrying on propaganda, or otherwise attempting, to influence legislation (except as otherwise provided in subsection (h)), and which does not participate in, or intervene in (including the publishing or distributing of statements), any political campaign on behalf of (or in opposition to) any candidate for public office.

The IRS itself explains the possible consequences: “Contributions to political campaign funds or public statements of position (verbal or written) made on behalf of the organization in favor of or in opposition to any candidate for public office clearly violate the prohibition against political campaign activity. Violating this prohibition may result in denial or revocation of tax-exempt status and the imposition of certain excise taxes.”

Turley explained Harris’ message is “a direct political pitch to be played in hundreds of churches.”