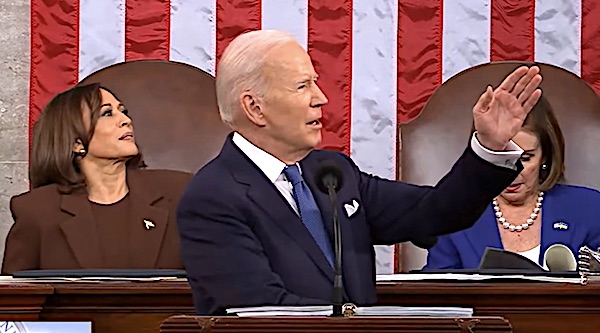 The crisis that Joe Biden has created at America’s southern border actually puts him in violation of the U.S. Constitution, charges a member of Congress.

“It is outrageous and in my judgment, it violates Article 4 Section 4 of the United States Constitution that requires the federal government to protect states from an invasion,” Rep. Mo Brooks said in an interview with Breitbart News Saturday.

Brooks, the Alabama congressman who now is seeking the state’s open Senate seat, explained Biden “absolutely” is in violation of the Constitution, according to a report in the Washington Examiner.

Biden created the crisis immediately when he took office by canceling the security efforts put in place by President Donald Trump, such as the border wall construction project, Trump’s procedure to have those seeking asylum remain in Mexico until their court hearings, and more.

Biden’s decision to drop so many barriers to entering the United States has been read in countries to the south of the border as an open invitation to arrive at the barrier and be welcomed into America’s system of financial supports and benefits, and so far multiple millions have responded to the invitation. Biden even has had planes loaded with illegal aliens delivered to various American cities in the dark of night.

Breitbart explained Brooks detailed a “recent trip to the border where he witnessed federal immigration officials effectively welcoming border crossers and illegal aliens to the U.S. by loading them on buses before taking them to a processing site, where most are likely to be released into the nation’s interior.”

“Most people think of [an invasion] as an armed force like an army. Nope, that’s not what the word ‘invasion’ means, it’s not so limited,” the congressman explained. “It includes the illegal activity that we’re seeing on our southern border and Joe Biden is absolutely in violation of Article 4 Section 4 of the United States Constitution.”

He said border states should enforce their own borders and then “declare the federal government and the president in violation of its contractual agreement.”

He said if that issue went to court, and moved up to the Supreme Court, the states likely would win.

He said the core reasons for the problem being created are political and financial.

““We’ve elected people who on the one hand, the political power from importing all of these folks by and large on welfare … and so that’s a made-for Democrat vote,” he said. “And on the other hand, we have special interest groups who are paying tens of millions of dollars to elect wimpy Republicans in Republican primaries — people who will be for open borders and will say nothing about importing cheap foreign labor no matter how much damage it does to destroy American families.”