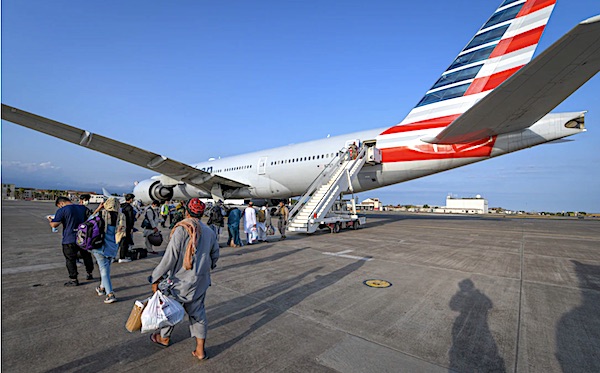 A Republican member of Congress is demanding answers from the Biden administration regarding charges that Afghan men have been arriving in the U.S. as evacuees from that disaster zone with “underage brides.”

U.S. Rep. Tom Tiffany, R-Wis., has written to the president’s appointees demanding transparency about how those newcomers arriving in America are being investigated.

He cited reports “that indicate that in the chaotic collapse of Afghanistan and subsequent evacuation, multiple Afghan men arrived with child brides or who were part of ‘polygamous families.’”

He continued, in his letter to Biden’s secretary of state, Antony Blinken, and secretary of Homeland Security, Alejandro Mayorkas, “Still other reports revealed cases of Afghan women and girls being raped and forced to marry older men to get out of the country.”

He warned the Washington insiders of the problem now facing America: “Even worse, these predators were apparently evacuated with their victims in tow – with some no doubt now present in the United States.”

Afghanistan collapse into chaos and now is being run by a “government” of terrorists in the Taliban after Biden ordered America troops to pull out. Biden left behind, to be ruled by terrorists, hundreds of Americans and thousands of Afghans who supported America’s work there over the last 20 years. Biden also left behind billions of dollars in America’s war machinery such as weapons and airplanes for the terrorists to have.

Tiffany wrote, “These troubling reports of child sex trafficking and polygamy, coupled with previous reports of Afghan nationals with possible connections to terrorist groups and at least one convicted rapist who had been previously deported making their way on to evacuation flights, only serve to fuel growing doubts about these assurances.”

But, he pointed out, the Biden administration still hasn’t explained “exactly how and where evacuees are being vetted.”

He also noted additional threats to America from “cases of COVID-19 and a measles outbreak among evacuees … .”

“The American public deserves clear answers to the questions that the administration’s conflicting and often contradictory statements regarding the now-accelerated vetting process raise – particularly given that the Afghan government no longer exists, and thus cannot confirm the identities, backgrounds and claims put forward by Afghans seeking legal status in the U.S.,” he said.

The Biden administration actually is making the situation worse, he wrote, by “sidestepping” the rules, and simply allow Afghans to enter the country.

He asks for answers to questions about adult men “married to minors,” “cases of polygamous families,” “forced marriages” and “cases of child sex trafficking.”

“The American public deserves clear answers to the questions that the administration’s conflicting and often contradictory statements” on the issues, he said.

Blinken just last week admitted to a congressional committee most Afghans arriving in the United States have not had any sort of background checks.