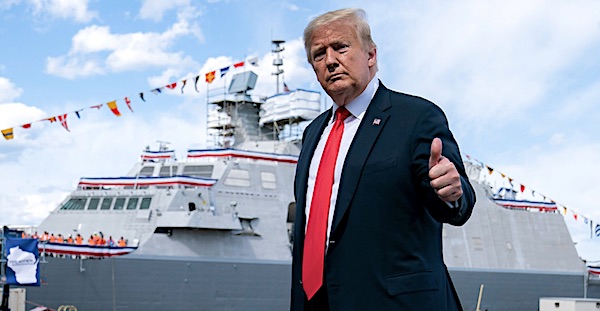 William A. Jacobson, a clinical professor of law at Cornell Law School and founder of the Legal Insurrection website, has proposed that Letitia James, the attorney general for New York, is a victim of “Trump Derangement Syndrome.”

The evidence? Her $250 million civil lawsuit against President Donald Trump and his family over his business dealings.

Writing at the Daily Caller News Foundation, Jacobson explained that although the state office James holds has great power, hundreds of employees and authority both in criminal and civil venues, “political neutrality is not what Attorney General Letitia James has delivered.”

In fact, her campaign for the office was based on her promise “to get Donald Trump on something, anything,” he explained. As a result, she’s “conducted herself in office to exact political revenge on the former president, his businesses, and his family.”

In fact, it was during 2018 while she was campaigning that James demanded: “He should be charged with obstructing justice. I believe that the president of these United States can be indicted for criminal offenses and we would join with law enforcement and other attorneys general across the nation in removing this president from office.”

Jacobson pointed out James also was on social media boasting of an endorsement from Rep. Maxine Waters, D-Calif., who said James would, if elected, “investigate Trump.”

When she was elected, Jacobson reported, James bragged, “I will be shining a bright light into every dark corner of his real estate dealings….”

In office, she’s promoted multiple “investigations” of Trump, “even threatening a church as which Eric Trump was appearing,” Jacobson wrote.

Then came this week’s announce of a civil lawsuit against the Trumps.

However, Jacobson pointed out that no one is alleged to have lost money because of any Trump action, and the focus of the dispute, the valuation of properties, was conceded by even the New York Times to be “often subjective.”

All of the loans that generated the dispute have been paid off.

“Tish James campaigned on and conducted her office for the purpose of investigating a political opponent and those around him trying to find a crime. That is Soviet-level prosecutorial abuse where individuals are targeted not to prosecute a crime, but to sift through their lives in the hope of finding a crime,” Jacobson said. “And lacking a prosecutable crime, trying to bring them down and purge them from the economic world through a civil lawsuit.”

Trump Derangement Syndrome is a term coined for a malady suffered by those who hate something simply because President Trump is involved.

Just a day earlier, it was longtime legal expert and Harvard law professor emeritus Alan Dershowitz who said James doesn’t qualify to be handling a civil case she filed this week against Donald Trump and his family members.

“I like Letitia James. She’s a very nice person, but she campaigned on the promise to get Trump before seeing any evidence, and so she is just fulfilling a campaign promise,” he said in comments reported in the Washington Examiner.

“You can’t have prosecutors even civilly prosecuting a defendant if they made a campaign promise that they have to fulfill. They are not neutral and objective.”

He said if he was on Trump’s legal team, he would file a motion in court to have her excluded and disqualified.

He also wondered what grounds there were for her to be involved in the first place.

“Look, who are the people who were defrauded here, they claim? The biggest banks in the world. Why can’t the biggest banks sue him and take care of themselves? Why does Letitia James have to be out there protecting and defending the biggest banks in that country who haven’t sued him at all? So this doesn’t pass the test of a legitimate civil complaint, and I think they should challenge this vigorously,” he said.

It was President Trump’s son, Eric, who had pointed out earlier when James announced her case that James was on record promising to get his father – long before any evidence or testimony had been reviewed.

Be aware of James’ offensive language in the following clip:

Not a political “witch hunt?!” What a joke… pic.twitter.com/dzuGaW9vNy