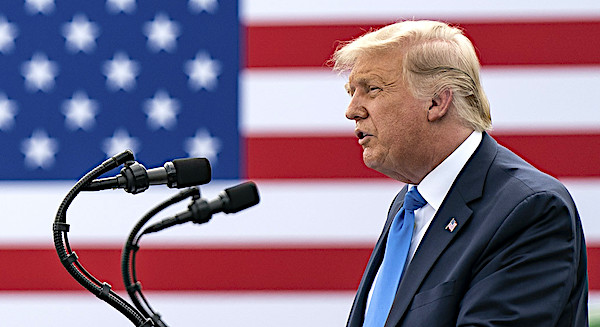 Former President Donald Trump erupted on top “Republicans in Name Only” on Sunday, issuing a scathing statement saying these “stupid people” are “nasty, jealous, not smart, and of no use to the potential greatness of our country.”

Trump’s full statement said: “I listen to all of these foolish (stupid!) people, often living in a bygone era, like the weak and frail RINO, Peggy Noonan, who did much less for Ronald Reagan than she claims, and who actually said bad things about him and his ability to speak, or Rich Lowry, who has destroyed the once wonderful and influential National Review, the pride and joy of the legendary William F. Buckley, or George Will, whose mind is decaying with hatred and envy before our very eyes, or Jonah Goldberg and Stephen Hayes, two people who are finally out of the conversation and of no relevance whatsoever.

“Where do these people come from? They have no idea what the MAGA movement is, and even less of an understanding of America First, which is necessary, and even vital, to save our Country. People like these are nasty, jealous, not smart, and of no use to the potential greatness of our Country.

“They talk, they criticize, and they complain, but they don’t have the ability or talent to get anything done. They are shortsighted ‘losers’, and will never understand what it takes to Make America Great Again!”

On Thursday, Noonan wrote a column in the Wall Street Journal claiming the January 6 hearings on Capitol Hill are “sinking” Trump. https://www.wsj.com/articles/trump-biden-rejection-approval-ratings-january-6-hearings-committee-liz-cheney-adam-schiff-presidential-election-2024-2020-desantis-11656018619

“Mr. Trump’s national polling numbers continue underwater, but the real test will be to see those numbers after the Jan. 6 hearings are over. I believe we’ll see Rep. Liz Cheney’s kamikaze mission hit its target, and the SS Trump will list,” she wrote.

“Both parties are rejecting their leaders, Donald Trump and Joe Biden,” Noonan added. “It’s a continuing tectonic shift and the story underlying every daily political story. It’s building and will only grow. Both parties are starting to scramble for what’s next, who’s next. Both are casting about.”

Sunday morning, Noonan appeared on NBC’s “Meet the Press,” voicing her opinion on the Supreme Court’s overturn of Roe v. Wade, which sent the issue of abortion laws back to the states.

“Look, you know what the Republican Party should do now? It should use this victory – if you see it that way – to change itself and become a party that helps women,” she said, provoking laughter from those on the panel.

The entire “Meet the Press” panel laughed out loud at Peggy Noonan today when she said the GOP “should become a party that helps women” after its abortion “victory.” pic.twitter.com/uSth0nkutC

“He might have been the only Republican who could beat Hillary in 2016. But he’s a sure loser in 2024,” Noonan wrote.