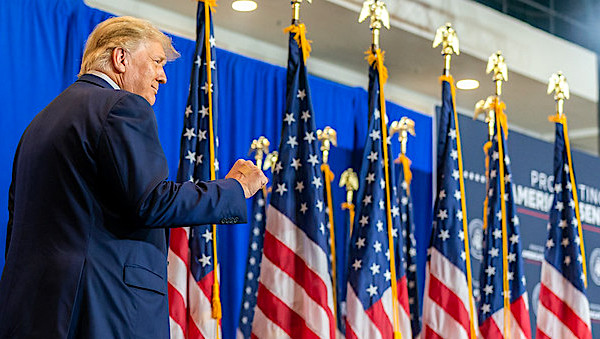 Lawyers for President Trump on Monday went to court seeking the appointment of a special master to review the FBI raid – and the property agents took from his Mar-a-Lago home when they invaded it just weeks ago.

The court filings charge that the scheme by the Biden administration, through Attorney General Merrick Garland who approved the raid, “involved political calculations aimed at diminishing the leading voice in the Republican Party, President Trump.”

Fox News explained, “According to the motion filed Monday evening in the U.S. District Court for the Southern District of Florida, Trump and his legal team are seeking an order to appoint a special master to review the records obtained during the search; blocks the further review of seized materials by the government until a special master is appointed; requires the Justice Department to provide a more detailed receipt for property and requires the government to return any item seized that was not within the scope of the search warrant.”

In fact, according to a still-standing court precedent set when Bill Clinton was in the White House, if materials are in the possession of a former president, they are presumed to be his.

Further, that ruling confirmed that presidents can declassify material directly, without following all the procedures others are required to obey. The FBI claimed there was classified material at Mar-a-Lago and Trump said he declassified it all.

Trump’s filing charged the raid on his home was “unprecedented” and “unnecessary.”

So, he said, he is “strongly asserting” his rights including under the Fourth Amendment regarding the “unAmerican Break-In by dozens of FBI agents, and others, of my home…”

In a statement, he said, “They demanded that the security cameras be turned off, a request we rightfully denied. They prevented my attorneys from observing what was being taken in the raid, saying ‘absolutely not.’ They took documents covered by attorney-client and executive privilege, which is not allowed. They took my passports. They even brought a ‘safe cracker’ and successfully broke into my personal safe, which revealed…nothing!”

He wants the Biden DOJ, which also was key to the Russiagate conspiracy theory cooked up by Democrats and leftists in the department during his first campaign, to stop reviewing materials immediately.

“ALL documents have been previously declassified,” Trump said. “We are demanding the appointment of a SPECIAL MASTER to oversee the handling of the materials taken in the raid. We are further demanding that the DOJ be forced to turn over a REAL, without ‘plants,’ inventory of my property that was taken and disclose where that property is now located.”

He charged, “The wrongful, overbroad warrant was signed by a Magistrate Judge who recused himself just two months ago, from a MAJOR civil suit that I filed, because of his bias and animus toward me. This Mar-a-Lago Break-In, Search, and Seizure was illegal and unconstitutional, and we are taking all actions necessary to get the documents back, which we would have given to them without the necessity of the despicable raid of my home, so that I can give them to the National Archives until they are required for the future Donald J. Trump Presidential Library and Museum.”

The lawyers charged that government agents “seized documents, privileged and/or potentially privileged materials, and other items—including photos, handwritten notes, and even President Trump’s passports—that were outside the lawful reach of an already over broad warrant.”

They must be “returned forthwith.”

There has been speculation that the FBI wanted the search in order to determine whether Trump had any documentation from the DOJ’s work create the Russiagate conspiracy theory in 2016 that could be used against the department.

The document also confirms Trump had been working with the federal agents in order to make sure the government had access to whatever records it needed.

The motion also warns against the DOJ attacks on Trump.

“The FBI and DOJ have demonstrated a willingness to treat President Trump differently than any other citizen,” the motion said, because of the years of the Russiagate claims.

The Washington Examiner reported that a host of congressional Republicans have condemned the raid, and they are demanding answers from Garland and the FBI.