Did Muslim suspect pick Boulder store because it was kosher? 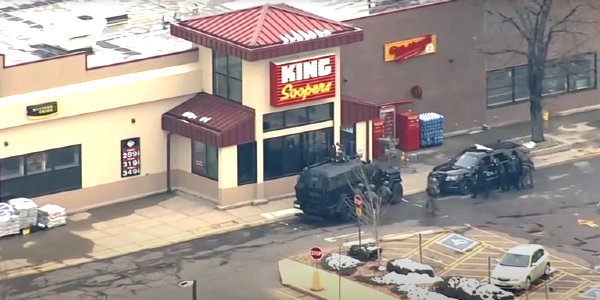 Why did Boulder shooting suspect Ahmad Al Aliwi Al Issa of Arvada, Colorado, go to a King Soopers grocery store 25 miles away from his home to carry out his attack?

The investigation of the murder Monday of 10 people is only beginning. But the indication that the Syrian immigrant had ISIS sympathies combined with the super market’s advertised kosher offerings for its significant Jewish clientele has drawn attention on social media.

In a Twitter string, a variety of users noted the store in south Boulder is in an area with many Jewish families. And the shooting took place in the week leading to Passover.

Some pointed to a webpage that states King Soopers is “Your One Stop Shop for Kosher Groceries.”

Others noted, however, that the Kosher page is on the chain’s website, and there’s a Kings Sooper in Al-Issa’s hometown and others in between. Further, there’s another Kings Sooper in Boulder that boasts of having the city’s first kosher bakery.

The Jewish News Service reported the local Jewish community was grieving the shooting, noting it happened at “our grocery store.”

The Jewish Community Center of Boulder, which is about four miles from the site of the shooting, held a vigil Tuesday evening for local residents “to connect and grieve.”

“Our hearts are with the Boulder community as the shooting at the King Soopers has unfolded before our eyes. We are shaken to our core, and we mourn the loss of life,” said a social-media post signed by Jonathan Lev and Lee Strongwater, JCC’s executive director and board president. “Our thoughts are with the families of the victims, law enforcement and first responders who put their lives on the line for our beloved community.”

“We are traumatized,” it continued. “This is our home, this is our grocery store.”

After Boulder Police Chief Maris Harold announced Tuesday that Al Issa had been charged with 10 counts of first-degree murder, the National Pulse reported his purported Facebook page, which has now been removed, included pro-Islam and anti-Trump messages.

In a subsequent tweet, Posobiec said, “It is beginning to look like the Boulder shooting was a jihadist terror attack.”

And Tuesday evening, the New York Times reported he was known to the FBI. The paper said Al Issa was linked to another person who has been under investigation but didn’t give more details.

The #Boulder #Colorado shooter at King Soopers has been named: Ahmad Al Issa. Here are a few screenshots from his FB. pic.twitter.com/hY0WgZuTQd

In high school, the brother said, he often said he was “being chased, someone is behind him, someone is looking for him.”

Al Issa was “short-tempered” and “scary,” according to a former high school wrestling teammate, Dayton Marvel, the Denver Post reported.

Marvel said Al Issa once threatened to kill people during a match.

“He was kind of scary to be around,” Marvel said.