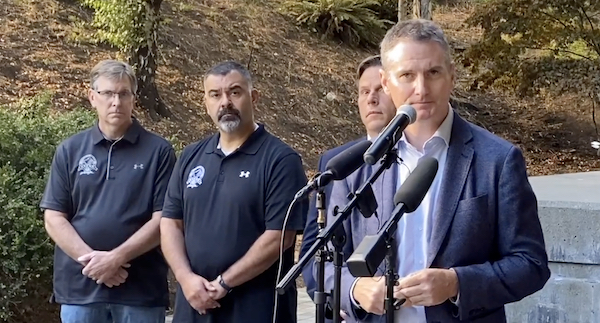 A television journalist who says he was fired by Seattle’s ABC affiliate because his reporting ran afoul of the establishment narrative on hot-button issues confronted members of the city council after the heads of local law-enforcement unions placed some of the blame for a spike in crime on their defunding of police.

Now an independent reporter, Jonathan Choe posted a video on Twitter in which he highlighted comments of law-enforcement leaders then got reaction from various council members.

Mike Solan, the president of the Seattle Police Officer’s Guild, emphasized the “dire situation” the Seattle area finds itself in “post-2020 riots and defunding.”

Dennis Folk, the King County Corrections Guild president, said the forces are “losing officers faster than we can hire them.”

“With all the stuff that’s been going on over the last two years, no one wants to do this job anymore,” said Mike Mansanarez, the King County Police Officers Guild president.

Solan said the “victims should be the focal point of this post-defunding nonsense that we’re living in.”

After the news conference, Choe asked one of the leaders of the local defund-the-police movement, council member Lisa Herbold, if she regretted her decision.

“Jonathan, I am not going to have this conversation right now,” she said.

Choe pressed: “Why can’t you answer that simple question?”

“We made a reduction in the police department budget,” she said. “We did not defund SPD.”

Herbold claimed “not a single dollar cut resulted in a single layoff of a single police officer.”

Council member Andrew Lewis argued big cities across the nation are all seeing a surge in crime.

“I think that we need to be taking a holistic approach on how we tackle that problem,” he said. “I mean, obviously, the police have a role.”

Choe asked Lewis, if he had to do it all over again, would he pledge to defund SPD?

“I mean, what we need to do is strategically look at how we can have comprehensive public safety,” he replied. “And that might involve level of reallocating resources.”

Choe’s feature concluded with Solan, the Seattle police officers union chief, observing that with an election coming up, the defund-police activists are forced to listen to voters.

“As you noticed,” he told Choe, “not many people are talking about defunding anymore.”

UNITED FRONT: King County law enforcement unions say crime is spiking/staffing is at historic lows. They say “defund the police” movement is partly to blame. I asked some @SeattleCouncil members if they regretted pledging support for this “failed social experiment.” #Seattle

Defund the police
After activists infamously took over a portion of Seattle in the summer of 2020 and called for defunding the Seattle Police Department by 50%, the City Council voted to cut salaries and jobs for as many as 100 officers. More than 200 demoralized officers quit, and the city’s first black police chief, Carmen Best, was among them.

Seattle’s new mayor, Bruce Harrell, was elected last fall on a pledge to reject calls to defund police, but in June the Seattle Times reported the city’s sexual assault and child abuse unit staff had been so depleted it had stopped assigning new cases with adult victims.

The Seattle paper noted that enforcement agencies nationwide have suffered labor shortages since the 2020 protests of the death of George Floyd in police custody.

“But Seattle’s failure to staff its sexual assault unit stands out from other local police departments and raises questions about the Seattle Police Department’s priorities, advocates say,” the Times reported.

“We have done our best to try and let people know what that means on the sexual assault side – it means that these cases are not being investigated the way they should be,” he told the Times.

In July, the city of Seattle was sued by the family of a black teenager whose murder in the occupied territory remains unsolved. The family of 16-year-old Antonio Mays Jr. contends their son might still be alive if not for the failure of city leadership to provide medical, police and emergency services to the Capitol Hill Organized Protest zone, known as CHOP. It was only after Mays’ death and a protest at the home of then-Mayor Jenny Durkan that the city shut down the CHOP zone. Durkan previously had celebrated the unprecedented protest as “the summer of love.”

Earlier, Seattle settled a wrongful-death lawsuit for $500,000 brought by the family of another victim of the CHOP zone, Horace Lorenzo Anderson Jr.

In March, the immigrant owner of a Seattle bakery who closed a downtown shop amid record-breaking crime as well as drug users blocking the entrance while police stand by idly explained why she finally gave up.

After a man was shot dead around the corner of Piroshky Piroshky bakery, Olga Sagan said it finally was time to stop pushing for change.

“No one is listening. This is not new. Look at how many small businesses we have left here. We have only big businesses here,” said Sagan in an interview with independent journalist Brandi Kruse.

“I’m a smart business owner. I have given up my business during pandemic. I can read signs. I can read patterns. And this is a pattern that I can’t deal with anymore,” she said.

Last August, the sheriff of King County informed her employees that they had to work from home because it was too dangerous to come to Sheriff’s Headquarters in downtown Seattle.