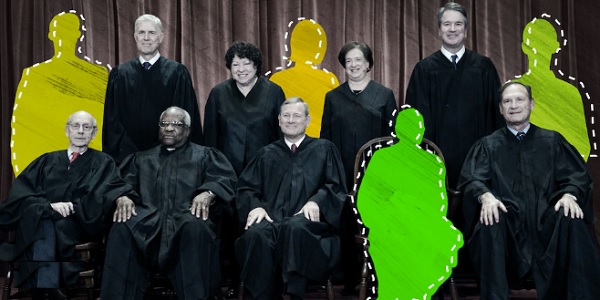 One of the more extreme positions held by Democrats now in Washington, among radical plans for the government to spend trillions on social programs, use tax money to fund abortions around the globe and take over all elections, has been the strategy to pack the Supreme Court.

Democrats have been raging about the issue ever since President Trump appointed three justices, which apparently now gives those who are labeled as “conservative” a slight majority on the bench.

Leaders like Chuck Schumer have insisted on the appointment of enough leftist judges so that the progressives can obtain what they want through the court system as they have in previous years, when there was a liberal majority on the bench.

But now there could be some headwinds to that goal.

It’s because a commission of almost all leftists and Democrats to review the strategy and raise discussion points isn’t in sync with the party’s general plan.

And Fox News reported that made progressives even more angry.

“This report is an abomination,” a Slate writer, Mark Joseph Stern, said on social media. “It assumes that today’s Supreme Court is basically apolitical while fretting that reforms with any real teeth would politicize it, and potentially break democracy. Republicans must be thrilled with this outcome. It’s a gift to the GOP.”

Russ Feingold, chief of the leftist American Constitution Society, said, “We have said since the Commission’s beginning that for the Commission to provide a meaningful contribution to restoring the legitimacy of our judiciary, it needs to advance a specific list of Supreme Court reforms that can be acted upon in the near term. The discussion materials released today unfortunately fail to match the urgency of the situation and do not lay out a solution to the legitimacy crisis before us.”

“The revelation could give new fuel to Democratic calls for packing the court, which is now considered conservative by a 6-3 margin. Calls for the party to add seats and fill them with liberal-leaning justices intensified during the Trump administration, when three conservative justices were added, including Amy Coney Barrett , who was confirmed to replace liberal icon Ruth Bader Ginsburg last fall,” the Examiner said.

“As a legal matter, we conclude that Congress has broad power to structure the Supreme Court by expanding (or contracting) the number of Justices,” the report said. “The prudential question is more difficult, and Commissioners are divided on whether Court expansion would be wise.”

The White House said the commission documents so far are only materials for discussion, and its final document will be done sometime in the future.

That opinion was emphasized by Co-Chairman Bob Bauer, who was White House counsel to Barack Obama.

The Examiner report said, “The commission’s discussion materials, which come ahead of a report that is expected to be released later this year, present a mixed view on the merits of packing the Supreme Court.”

Among the comments: “Proponents of Court expansion argue that by adding two or more seats to the Supreme Court, Democratic lawmakers could help restore balance to – and, thus, the legitimacy of – the Court. Those who take this perspective also emphasize that a failure to respond to the hardball tactics since 2016 might encourage future aggressive measures in the Senate confirmation process.”

And they say: “But the risks of Court expansion are considerable, including that it could undermine the very goal of some of its proponents of restoring the Court’s legitimacy. Recent polls suggest that a majority of the public does not support Court expansion. And even some supporters of Court expansion acknowledged during the Commission’s public hearings, the reform… would be perceived by many as a partisan maneuver.”

Leftists made clear they would be not satisfied with anything less than exactly what they want – a process that would make the Supreme Court a permanently leftist organization.

NAACP Legal Defense Fund chief Sherrilyn Ifill said, “This entire discussion is framed in the context of partisan politics. And I actually think that is a disservice to the exploration of this issue.”

The draft comments were released as the commission prepared to discuss its agenda on Friday. A final report should be handed to the president sometime next month.

The commission includes 36 lawyers and others.

Meanwhile, Democrats already are working on plans to pack the court with an additional four justices.

Joe Biden has made clear he wants changes made, but he hasn’t specified exactly what.

It reveals another one of the president’s flip-flops. Back when he was a senator, he said, “President Roosevelt clearly had the right to send to the United States Senate and the United States Congress a proposal to pack the court. It was totally within his right to do that. He violated no law. He was legalistically, absolutely correct. But it was a bonehead idea. It was a terrible, terrible mistake to make. And it put in question, if for an entire decade, the independence of the most significant body … in this country, the Supreme Court of the United States of America.”