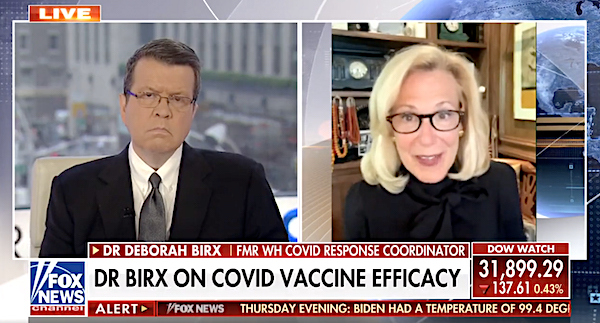 Defenders of federal officials, including President Biden, who declared one year ago that people who received the COVID-19 vaccines would not contract the disease argue “the science” changes over time.

But the White House coronavirus response coordinator at the time the vaccines were developed and rolled out said in an interview Friday she wasn’t surprised that people who were quadruple vaccinated, including Biden and Dr. Anthony Fauci, contracted the disease.

“I knew these vaccines were not going to protect against infection and I think we overplayed the vaccines,” Birx told the Fox News Channel’s Neil Cavuto.

Birx, who is promoting a new book in which she confesses she manipulated data and quietly altered CDC guidance without authorization, was responding to the question of what she would say to unvaccinated people who in light of the ineffectiveness of the vaccines in preventing COVID might ask why they should bother getting the shots.

She said that during the current wave, the Pfizer drug Paxlovid is what “is going to save you now.”

“But once we get through this wave, during the lull, you should get vaccinated, because we do believe it will protect you, particularly if you are over 70,” she said, referring to protection from severe illness.

The government “overplayed” the vaccines, she said, by telling people they would not get infected. And when that didn’t turn out to be true, it “made them worry that it’s not going to protect against severe disease and hospitalization.”

Birx insisted the vaccines “will” protect against severe illness but, perhaps unwittingly, added a significant caveat.

“Let’s be very clear, 50% of the people who died from the omicron surge were older, vaccinated,” she said.

In fact, an analysis of Pfizer and Moderna COVID vaccine trials found the mRNA shots are more likely to land a recipient in the hospital than to provide protection from a severe adverse event. The findings were similar to those of a recent pre-print analysis that found “no evidence of a reduction in overall mortality in the mRNA vaccine trials.” And a new study published in the New England Journal of Medicine found that two doses of the mRNA vaccines increased the risk of COVID-19 infection during the omicron wave.

Earlier this month, Fauci – who tested positive for COVID-19 after being quadruple vaccinated – acknowledged to Cavuto that the vaccines “don’t protect overly well” from infection.

As for Paxlovid – which caused a rebound of COVID symptoms after Fauci was treated with the drug – an analysis of the Pfizer trial found little difference in the number of hospitalizations or deaths between placebo and Paxlovid recipients.

The FDA, nevertheless, has authorized state-licensed pharmacists to circumvent doctors by directly prescribing it.

Former White House Covid Response Coordinator Dr. Deborah Birx to Neil: “50% of the people who died from the omicron surge were older, vaccinated. So that’s why I’m saying even if you’re vaccinated and boosted, if you’re unvaccinated right now, the key is testing and paxolovid.” pic.twitter.com/1oB62gFdCJ

In her new book “Silent Invasion,” Birx confesses she “devised” a “strategic sleight-of-hand” method of reporting she described as “subterfuge.”

“This wasn’t the only bit of subterfuge I had to engage in,” she writes.

Birx maintained, contrary to the White House and the CDC, that the asymptomatic spread of COVID-19 was significant.

She says that “eight months into the pandemic, many at both the White House and the CDC still refused to see that silent spread played a prominent role in viral spread and that it started with social gatherings, especially among the younger adults.”

Birx opposed the advice of then-coronavirus adviser Dr. Scott Atlas to limit testing on the premise that asymptomatic transmission was minimal and not driving the pandemic.

She and then CDC Director Robert Redfield “agreed to quietly rewrite the guidance and post it to the CDC website.”

“We would not seek approval. Because we were both quite busy, it might take a week or two, but we were committed to subverting the dangerous message that limiting testing was the right thing to do,” she writes.

Birx recalls a phone call from White House Chief of Staff Mark Meadows: “What the hell do you think you’re doing? You rewrote and posted the CDC testing stuff,” said Meadows, according to Birx’ account.

“There’s no ‘buts’ here. You went over my head,” Meadows said, according to Birx.

Birx resigned from her White House role in December 2020.

Jeffrey A. Tucker, founder and president of the Brownstone Institute, recalled that while Dr. Anthony Fauci has been the front man for the media, Birx was the main influence in the White House behind the nationwide lockdowns.

But after warning Americans to restrict their Thanksgiving 2020 gatherings to “your immediate household,” she traveled to Delaware, where she met with four generations for a traditional Thanksgiving dinner.

Tucker noted her only real experience with infectious disease came from her work on AIDS, which Tucker points out is “a very different disease from a respiratory virus that everyone would eventually get but which would only be fatal or even severe for a small cohort, a fact that was known since late January.”