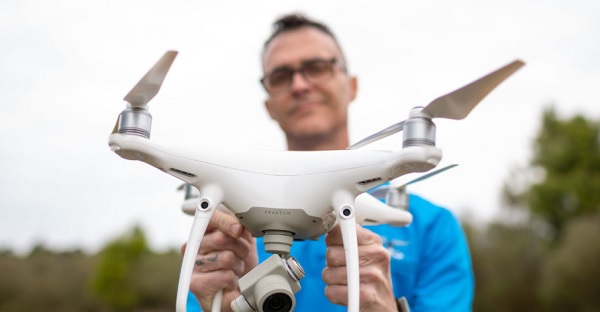 A North Carolina photographer is fighting back against claims by surveyors that the drone-camera photographs he sells customers of their properties is illegal “surveying.”

The Institute for Justice said their lawsuit is on behalf of Michael Jones of Goldsboro.

IJ said the state government’s Board of Examiners for Engineers and Surveyors has been threatening drone operators, alleging that certain photography amounts to surveying without a license.

But IJ said the images and maps that Jones creates for customers are not being used to set legal boundaries.

“They were purely for informational purposes.”

And that, the lawsuit contends, is speech protected by the First Amendment.

“Drone technology may be new, but the principles at stake in Michael’s case are as old as the nation itself,” said Sam Gedge, an attorney with the Institute for Justice. “Taking photos and providing information to willing clients isn’t ‘surveying’; it’s speech, and it’s protected by the First Amendment.”

Jones began using a drone camera several years ago to expand his business as a photographer and videographer.

He took photos of homes for sale and buildings under construction. And he did a job for a company that wanted to use thermal imaging to see where heat was escaping from its warehouse.

But IJ said he received a “warning letter” from the Board of Examiners for Engineers and Surveyors that his work amounted to “surveying.”

“He had always been careful to note that his work did not establish property lines and could not be used for legal purposes. But a board investigator told him that providing images with any metadata (information about GPS coordinates, elevation, or distance) or that stitching together images qualified as surveying and required a full-blown, state-issued license,” IJ explained.

So he shut down much of his business.

“When the surveying board wrote that I was breaking the law, I could hardly believe it,” said Michael. “I didn’t think that I was doing anything that could be considered surveying. In fact, I don’t know of any surveying company that was using drones like I was.”

IJ argued the First Amendment “prohibits the government from restricting free speech, and free speech includes taking photographs and sharing information about the photos. And just because Michael sells his images to willing buyers does not mean that the government can ban his speech.”

IJ lawyer James Knight said it’s “just the newest example of a licensing board expanding its authority to crack down on competition.”

“But licensing boards should not be able to use their authority just to protect businesses from competition. The government should step out of the way and let innovative businesses like Michael’s continue serving their customers.”