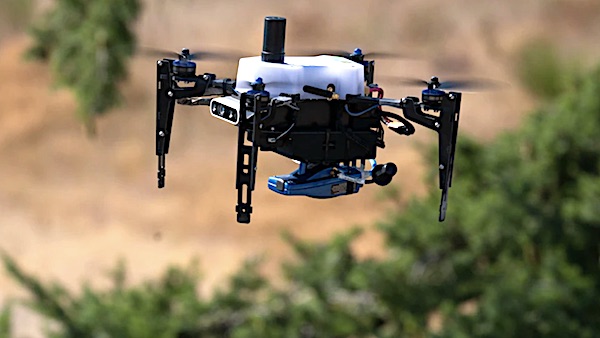 An organization that defends civil liberties in the digital world has issued a warning about the possibility raised by one surveillance vendor that it could arm its drones with tasers.

It is the Electronic Frontier Foundation that reports Axon, which is a taser and surveillance vendor, has proposed a “solution” to school shootings.

The company’s strategy is for a “remote-controlled flying drone armed with a taser,” EFF reported.

But it warned, “For many, many reasons, this is a dangerous idea. Armed drones would mission-creep their way into more every-day policing. We must oppose a process of normalizing the arming of drones and robots.”

The organization said in an online position paper, “Police currently deploy many different kinds of moving and task-performing technologies. These include flying drones, remote control bomb-defusing robots, and autonomous patrol robots. While these different devices serve different functions and operate differently, none of them – absolutely none – should be armed with any kind of weapon.”

“Mission creep is very real. Time and time again, technologies given to police to use only in the most extreme circumstances make their way onto streets during protests or to respond to petty crime. For example, cell site simulators (often called ‘Stingrays’) were developed for use in foreign battlefields, brought home in the name of fighting ‘terrorism,’ then used by law enforcement to catch immigrants and a man who stole $57 worth of food. Likewise, police have targeted BLM protesters with face surveillance and Amazon Ring doorbell cameras,” the foundation reported.

The organization explained it long has opposed arming drones or robots, whether the weapon is lethal or less than lethal.

“And we’re far from the only group to do so,” the report said.

“We cannot state this strongly enough: if police get their hands on taser drones, they will not sit in a warehouse until the next emergency mass shooting situation. History has proven this. We will see them flying over protests and shopping districts. We will hear news stories about police using a drone to taser someone for vandalism, petty theft, or fleeing the drone. It will not be a matter of if, but when,” the warning said.

What would happen if the project advances?

“Police will be more likely to use this kind of force if the entire process feels like a video game – if they can send tens of thousands of volts through a person’s body with the push of a button far removed from that person. And the person at risk of being tased might not hear the drone’s commands or may be confused by the presence of a floating robot.”

EFF pointed out that police already have used ordinary tasers to kill more than 500 people since 2010.

The group said, “We’ve seen this before. Time and time again, police conjure the extreme worst-case-scenario threat in order to deploy extraordinary powers, which end up being used in everyday acts of policing which disproportionately affect the lives of people of color, immigrants, and other vulnerable members of society. Before these tools are deployed, we demand that armed police drones never see the light of day.”