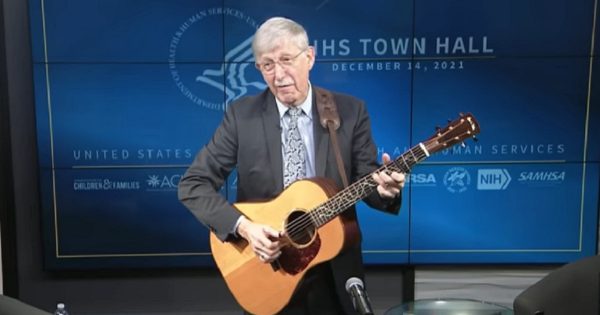 “This proposal from three fringe epidemiologists who met with the Secretary seems to be getting a lot of attention – and even a co-signature from Nobel Prize winner Mike Leavitt at Stanford,” Collins wrote in an Oct. 8, 2020, email posted on Twitter by researcher Phillip W. Magness.

“There needs to be a quick and devastating published takedown of its premises,” the NIH chief continued. “I don’t see anything like that on line yet – is it underway.”

Their Great Barrington Declaration criticized universal lockdowns, calling for focused protection of the vulnerable older population based on data showing they are more than a thousand times more likely to die from COVID infection than the young.

“As immunity builds in the population, the risk of infection to all – including the vulnerable – falls,” the epidemiologists wrote. “We know that all populations will eventually reach herd immunity – i.e. the point at which the rate of new infections is stable – and that this can be assisted by (but is not dependent upon) a vaccine. Our goal should therefore be to minimize mortality and social harm until we reach herd immunity.”

Fauci, shortly after the declaration came out, condemned the idea of relying on herd immunity to curb the spread of the novel coronavirus as “nonsense and very dangerous.”

The declaration has been signed by 15,316 medical and public health scientists, and 45,154 medical practitioners.

Levitt, mentioned by Collins in the email as a signatory, is a biophysicist and professor of structural biology at Stanford University. He was recipient of the 2013 Nobel Prize in chemistry.

Among other Great Barrington signatories are Dr. David Katz, the founder of the Yale University Prevention Research Center, and Dr. Cody Meissner, a professor of pediatrics at the Tufts University School of Medicine who is known as an expert on vaccine development, efficacy and safety.

Early in the pandemic, then-New York Democratic Gov. Andrew Cuomo mentioned Katz on several occasions in his daily briefing, openly wondering if his advice against the universal lockdowns should be heeded.

Harvard’s Kulldorff is a professor of medicine, a biostatistician and epidemiologist with expertise in detecting and monitoring infectious disease outbreaks and vaccine safety evaluations.

Oxford’s Gupta is an epidemiologist with expertise in immunology, vaccine development and mathematical modeling of infectious diseases.

In a recent interview with NPR reflecting on his 12 years as the head of NIH, Collins lamented “the 60 million people still holding off of taking advantage of lifesaving vaccines,” which he said “is pretty unexpected.”

“It does make me, at least, realize, ‘Boy, there are things about human behavior that I don’t think we had invested enough into understanding.’”

Collins said the nation “basically have seen the accurate medical information overtaken, all too often, by the inaccurate conspiracies and false information on social media.”

“It’s a whole other world out there. We used to think that if knowledge was made available from credible sources, it would win the day. That’s not happening now,” he said.

NPR’s Selena Simmons-Duffin asked Collins if more money should be invested “in the behavioral research side of things.”

“We’re having serious conversations right now about whether this ought to be a special initiative at NIH to put more research into health communications and how best to frame those [messages] so that they reach people who may otherwise be influenced by information that’s simply not based on evidence,” Collins replied. “Because I don’t think you could look at the current circumstance now and say it’s gone very well.”

Resignation amid evidence of false claim
Collins announced his resignation in October in the wake of the publishing of government documents indicating he falsely claimed his agency was not funding gain-of-function research at the Wuhan Institute of Virology.

In September, Richard Ebright, a molecular biologist at Rutgers University, said government documents reported by The Intercept “make it clear that assertions by the NIH Director, Francis Collins, and the NIAID Director, Anthony Fauci, that the NIH did not support gain-of-function research or potential pandemic pathogen enhancement at WIV are untruthful.”

Ebright was among the 16 scientists who authored a letter published last month in the prestigious British science journal The Lancet calling for another look at the evidence that the pandemic began with a lab leak. The scientists condemned a February 2020 letter organized by Wuhan lab collaborator Peter Daszak marginalizing anyone who entertained the lab-leak theory as a conspiracist. Ebright and his 15 colleagues said Daszak’s letter and a subsequent missive had “a silencing effect on the wider scientific debate, including among science journalists.”

It was under Collins’ leadership that the NIH lifted a moratorium on gain-of-function research in 2017 that was implemented during the Obama administration due to concerns that the research could trigger an outbreak.

Asked by Fox News host Neil Cavuto about the accusation regarding gain-of-function research, Collins said “it had nothing to do with my decision.”

He insisted “funding of that research was a million miles away in terms of the genome of that virus.”

Collins said he believes the pandemic most likely had a natural origin, starting in a bat.

“I have no evidence at all to support that,” he acknowledged, “but I can’t exclude it.”

The language of God
Collins, whose tenure at NIH began during the Obama administration, is known for his leadership in the effort to decode DNA. As the director of the National Human Genome Research Institute since 1993, he helped develop a revolutionary method of screening genes for disease.

He recounts his conversion from atheism to Christianity in his 20s in his book “The Language of God: A Scientist Presents Evidence for Belief.” He says he was influenced by how his Christian patients endured suffering and after reading some of the works of C.S. Lewis.

Collins also is the founder of The BioLogos Foundation, which focuses on dialogue between science and religion. His work on the genome project earned him the Presidential Medal of Freedom award in 2007 from President George W. Bush.

Since Camp Fantastic, a summer camp for kids with cancer, has to go virtual this year, my wife, Diane, and I made this #COVID19 parody on “Puff, the Magic Dragon” to let the kids know we’re with them in spirit during these challenging times. #NIH pic.twitter.com/N4pbo2eM6r

Vaccines ‘an answer to prayer’
In August, as schools prepared to reopen, Collins said children should wear a mask in class.

“This is not a political statement or invasion of your liberties. This is a life-saving medical device. Asking kids to wear a mask is uncomfortable, but kids are pretty resilient,” Collins said.

He contended that if children don’t wear masks, “this virus will spread more widely.”

“It will probably result in outbreaks in schools, and kids will have to go back to remote learning, which is the one thing we want to prevent,” he said.

Collins has said that religious believers should regard the COVID vaccines as a gift from God.

“For somebody who’s a believer, this is what you could call an answer to prayer,” he told Religion News Service in September.”If we’ve all been praying to God to somehow deliver us from this terrible pandemic, and what happens is these vaccines get developed that are safe and effective, well, why wouldn’t you want to say, ‘Thank you, God’ and roll up your sleeve?”