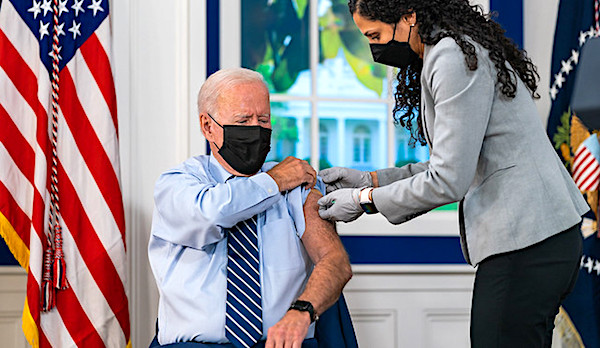 A top FDA official says a fourth COVID booster shot should be seen as a “stop gap” measure, concluding “we simply can’t be boosting people as frequently as we are.”

Dr. Peter Marks, director of the Center for Biologics Evaluation and Research, made the remark at the recent meeting of the FDA’s Vaccine and Related Biological Products Advisory Committee, TrialSite reported.

“I think we are very much on board with the idea that we simply can’t be boosting people as frequently as we are,” said Marks, a New York University-trained molecular biologist and hematologist/medical oncologist.

Marks said he’s the “first to acknowledge that an additional fourth booster dose that was authorized was a stopgap measure until we got things in place for the next potential booster, given the emerging data researching … advanced vaccines, mucosal vaccines, pan coronavirus vaccines.”

“But we are not going to get there for this coming year,” he continued. “And so this is really, trying to do the best we can with the knowledge we have at hand, which is something that we had to do a fair amount of over the past two years.”

Last month, the FDA expanded emergency use authorization for a fourth shot – a second booster – for people people age 50 and older without a vote of its expert panel.

At the time, Johns Hopkins University professor Dr. Marty Makary condemned the move in a series of tweets.

“There is no greater slap in the face of science than bypassing the customary FDA external expert voting process over an authorization with insufficient supporting clinical data,” Makary wrote.

The FDA vaccine panel met later, April 6, to discuss boosters, but no vote was taken.

Marks was at the center of the resignations of the two top FDA scientists last summer, Marion Gruber and Philip Krause, Politico reported. The news site cited a former FDA official who said the two officials quit because they were angered by the agency’s lack of autonomy regarding its approval of the vaccines.

A current official told Politico at the time that the resignations were due to differences with Marks.

Makary recalled that “political interference over boosters” by the White House was the issue behind the resignations of two the high-level FDA officials.

He argued there is “zero clinical data that a 4th dose reduces hospitalization risk.”

“There isn’t even any evidence that a 3rd dose reduces hospitalization risk in young people,” he said.

Meanwhile, the CDC and U.K. government data have indicated that the COVID-19 vaccines not only are ineffective in preventing cases and transmission, they rapidly lose protection against severe illness or death while posing risks.

Last month, a former adviser to the FDA commissioner who continues to serve in an oversight role said the agency is ignoring its requirement to disclose clear safety and efficacy problems with the COVID-19 vaccines. Also in March, an Army flight surgeon testified in federal court that she was ordered by high-level command not to discuss the controversy over Department of Defense data indicating a massive spike in serious injuries and illnesses among military personnel when the vaccines were rolled out in 2021. And, among many other safety signals, an analysis of CDC data by a former Wall Street executive an an insurance industry expert shows an alarming rise in excess deaths among Millennials over the past year amid the COVID vaccine rollout.