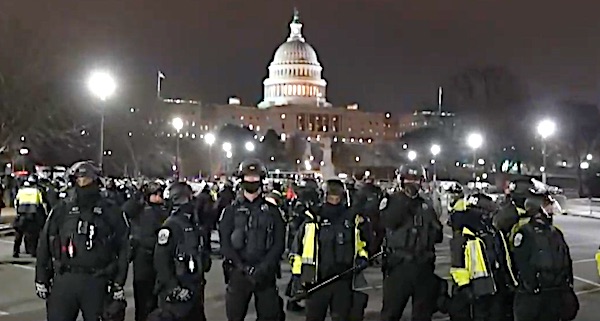 The January 6 “riot” at the U.S. Capitol featured thousands of people at a rally with President Trump and then hundreds going to the seat of government. It likely was a few dozen that were the ones who broke windows and doors and vandalized.

Hundreds, however, have been arrested and many detained behind bars for months already, even though some of them have raised a defense that they simply walked into the building and did not damage anything.

Some have reported the security police there even allowed them in, holding doors open for them.

Now there’s evidence that the government knows that.

A report at the Legal Insurrection blog explains the case-altering details were revealed in one of the many court cases now developing.

In a court filing, the government said, “[W]e are not in a position to turn over the universe of information we possess for defendant to review. Although we are aware that we possess some information that the defense may view as supportive of arguments that law enforcement authorized defendants (including defendant) to enter the restricted grounds, e.g., images of officers hugging or fist-bumping rioters, posing for photos with rioters, and moving bike racks, we are not in a position to state whether we have identified all such information.”

The blog reports that the admission “calls into question the trespassing and related non-violent crimes charged against defendants.”

The report said, “Federal prosecutors quietly revealed that they possess evidence that may sink their prosecutions of many of those who were present at the Capitol on January 6. This under-the-radar admission was made in a filing in the case of United States v. Couy Griffin. Griffin – an elected county commissioner for Otero County, New Mexico, a former pastor, and the founder of ‘Cowboys for Trump’ – is charged with entering a restricted area outside the U.S. Capitol on January 6, 2021.”

The report said, “On Jan. 6, Griffin and a videographer traveled to Washington, D.C. to protest the results of the 2020 Presidential Election. After attending the Stop the Steal rally at The Ellipse, Griffin headed toward the Capitol as the crowd formed around fencing which had been set up in anticipation of the presidential inauguration. Griffin and his videographer made their way to the outside deck of the Capitol, where the Presidential Inauguration was set to occur in a few weeks. There Griffin borrowed a bullhorn and led a group of protesters in prayer. He remained on the deck for about an hour and a half before voluntarily leaving the Capitol grounds with his videographer.”

Soon, Griffin was arrested and told he faced trespass and disorderly conduct counts.

DOJ January 6 evidence that has not yet been produced to the criminal defendants:

“We possess some information that . . . law enforcement authorized [people] to enter the restricted grounds…”

Actually, the report explained, prosecutors first demanded to detain him without bail.

“In its motion for pretrial detention of Griffin, the government argued that Cowboys for Trump ‘advocates for [g]un rights’ and that Griffin ‘is an inflammatory provocateur and fabulist who engages in racist invective and propounds baseless conspiracy theories, including that Communist China stole the 2020 Presidential Election.’ According to the government, Griffin’s ‘inflammatory conduct, repeated threats, delusional worldview, and access to firearms makes him a danger to the community.’”

A federal judge, however, wouldn’t go along after prosecutors admitted they believed Griffin to be a flight risk. But the court noted, “And there is also no allegation …. that he damaged any federal property, that he injured or risked injuring another person because of his conduct on January 6th, and certainly didn’t have a weapon to do so on January 6th; is that right?”

The prosecutor admitted that was right.

The case, incidentally, still continues, with the government recently asking for an extension so that it lasts longer.

It was during that request that prosecutors conceded they have – but won’t release – video of officers “hugging or fist-bumping rioters, posing for photos with rioters, and moving bike racks.”

The judge, in fact, pointed out the weak prosecution case, with, “The charge under 18 U.S.C. 1752(a)(1) with which Mr. Griffin is charged, you know, does require more than simply having – simply presenting proof of the fact that Mr. Griffin jumped over some fences or barriers, you know, to get onto the Capitol grounds …. that fact alone doesn’t constitute a crime under Section 1752(a)(1) …. In addition to breaching barriers of a restricted space, the Government also has to prove that the defendant knowingly entered this restricted building without lawful authority.”

House Speaker Nancy Pelosi, who has insisted over and over that the vandalism was, in fact, at attempt to overthrow the U.S. government, has assigned a partisan committee she chose to “investigate” the day.

Evidence reveals that officers on duty that day got no warning from their superiors of pending developments, and officials had declined President Trump’s offer of additional security.