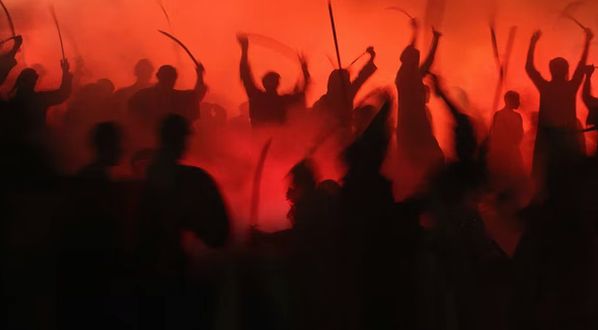 An alarming report from the Department of Homeland Security documents that law enforcement officials are investigating social media threats that radical abortion promoters plan to burn down or storm the Supreme Court building and murder justices and their law clerks when the court’s ruling, expected to overturn Roe v. Wade, is released.

Axios obtained the report and confirmed, “Law enforcement agencies are investigating social-media threats to burn down or storm the Supreme Court building and murder justices and their clerks, as well as attacks targeting places of worship and abortion clinics.”

The report said the unclassified memo, dated May 13, was by DHS’ intelligence arm and reveals those threats erupted following the leak of a draft opinion, and they “are likely to persist and may increase leading up to and following the issuing of the court’s official ruling.”

LifeNews called the report “very concerning” and pointed out, “The last two weeks have seen a shocking amount of pro-abortion violence following a leaked U.S. Supreme Court draft ruling that overturns Roe v. Wade. Radical abortion advocates across the country are engaging in violence, firebombing pro-life groups, vandalizing and disrupting churches, forcing pregnancy centers to close and staging intimidating protests outside the homes of members of the Supreme Court.”

While Chief Justice John Roberts confirmed the authenticity of the draft opinion in an abortion dispute, which would cancel Roe entirely and return regulation of abortion to state governments, several justices have said the efforts by the pro-abortion campaigners to intimidate them will not work.

But, LifeNews said, the report “indicates their lives could be at stake once the draft becomes the official opinion of the high court.”

DHS, to Axios, said the department “is committed to protecting Americans’ freedom of speech and other civil rights and civil liberties, including the right to peacefully protest.”

It was on social media, the report said, that threats discussed “burning down or storming the U.S. Supreme Court and murdering Justices and their clerks, members of Congress, and lawful demonstrators.”

According to the DHS’ Office of Intelligence and Analysis, the “grievances related to restricting abortion access could fuel violence by pro-choice abortion-related violent extremists and other [domestic violent extremists.]”

Already, an investigation has begun into a fire at a pro-life organization, Wisconsin Family Action, that happened on May 8. There, graffiti threatened, “If abortions aren’t safe [then] you aren’t either.”

DHS said symbols there were “typically used by anarchist violent extremists and others to convey anti-law enforcement sentiment.”

Also, several churches already have been vandalized, including some in Boulder and Fort Collins, Colorado, a state where leftist lawmakers and a homosexual governor recently installed into state law a plan that specifically deprives the unborn of any rights whatsoever and allows abortion up to and after birth.

The report said police also are investigating arson at a pro-life organization in Oregon.

There also have been pro-abortion radicals protesting at the homes of Supreme Court justices, which technically are illegal under federal law and should have subjected the protesters to arrest. However, that has not happened, and Democrat leaders such as Senate Majority Leader Chuck Schumer has endorsed the illegal actions.

In a message to Attorney General Merrick Garland, who has failed to enforce that federal statute, Republican Govs. Larry Hogan, of Maryland, and Glenn Youngkin, of Virginia, urged him to “provide sustained resources to protect the justices and ensure these residential areas are secure.”

On social media, a group calling itself Rise Up 4 Abortion Rights, threatened, “The leaked draft memo that states the Supreme Court has struck down #RoeVWade is an ATROCITY but It is not yet law & doesn’t have to be, but what they plan to do & will do if WE don’t stop them. Rise up! & RAISE HELL!”

Axios’ report claimed abortion violence “historically has been driven by anti-abortion extremists,” but conceded the memo warns, “this time, extremist acts could come from abortion-rights proponents.”

Just the News said, “The federal government’s recent focus on white supremacy and domestic violence appears apparent in the memo, which also reads, ‘Some racially or ethnically motivated violent extremists’ embrace of pro-life narratives may be linked to the perception of wanting to save white children and fight white genocide.’”

While threats to storm to court and kill justices are new, actual threats are not. WND has reported on how Sen. Jeanne Shaheen, D-N.H., “issued a warning” to the justices in light of their work on abortion disputes.

Fox reported it was during a virtual event featuring New Hampshire’s entire House and Senate delegation that WMUR reporter Adam Sexton asked if public debate over abortion had “muted” due to many people in the U.S. only knowing life post-Roe v. Wade.

Shaheen charged that nothing would be muted about the reaction if that decision is reversed, a move that would not outlaw abortion but would turn its regulation back over to states.

“I hope the Supreme Court is listening to the people of the United States because – to go back to Adam Sexton’s question – I think if you want to see a revolution go ahead, outlaw Roe v. Wade and see what the response is of the public, particularly young people,” Shaheen said.

“Because I think that will not be acceptable to young women or young men.”

.@SenatorShaheen on new abortion restrictions going into effect in N.H. & the upcoming Dobbs v. Jackson Women’s Health Organization case: “I think if you want to see a revolution, go ahead, outlaw Roe v. Wade and see what the response is…” #NHPolitics #WMUR pic.twitter.com/O7weoVuOSk

Earlier, during Supreme Court consideration of a separate abortion fight, Senate Majority Leader Chuck Schumer appeared at an abortion rights rally and screamed to the crowd: “I want to tell you, Gorsuch. I want to tell you, Kavanaugh. You have released the whirlwind and you will pay the price! You won’t know what hit you if you go forward with these awful decisions.”

Here are Schumer’s shouts, along with the commentary provided by CNN:

He said, “Justices know that criticism comes with the territory, but threatening statements of this sort from the highest levels of government are not only inappropriate, they are dangerous,” Roberts warned. “All Members of the Court will continue to do their job, without fear or favor, from whatever quarter.”

WND reported, too, when another Democratic senator threatened the U.S. Supreme Court if its justices don’t vote the way he wants on abortion.

That was Sen. Richard Blumenthal, D-Conn., who told The Hill that if the justices do not vote the way he wants on abortion:

“It will inevitably fuel and drive an effort to expand the Supreme Court if this activist majority betrays fundamental constitutional principles. It’s already driving that movement. Chipping away at Roe v. Wade will precipitate a seismic movement to reform the Supreme Court. It may not be expanding the Supreme Court, it may be making changes to its jurisdiction, or requiring a certain numbers of votes to strike down certain past precedents.”

Longtime liberal and constitutional expert Jonathan Turley, at the time, warned of the consequences of such threats.

“I have previously criticized Sen. Richard Blumenthal, D-Conn., for his almost unrivaled advocacy of censorship and speech controls. Blumenthal previously threatened social media companies not to ‘backslide’ in censoring opposing views. Now, Blumenthal is taking up the cudgel of court packing with not so subtle threats to conservative justices that, if they do not vote with their liberal colleagues, the court may be fundamentally altered. He is not alone in such reckless and coercive rhetoric.”

Turley noted, “Democratic leaders not only have embraced court packing but now openly threaten the court to vote with the liberal justices or face dire consequences for the court. …The Democrats are pushing to engage in court packing despite polls showing heavy opposition to the move from voters as well as opposition from the justices themselves.”

He continued, “It is particularly chilling to see United States senators openly pressuring justices to vote with their side or face severe consequences. Blumenthal went as far as to mention specific cases and the expected rulings. This follows raw demands in the confirmation hearing of now Justice Amy Coney Barrett that she promise to rule on particular cases ‘correctly’ as a condition for her confirmation,” he said.