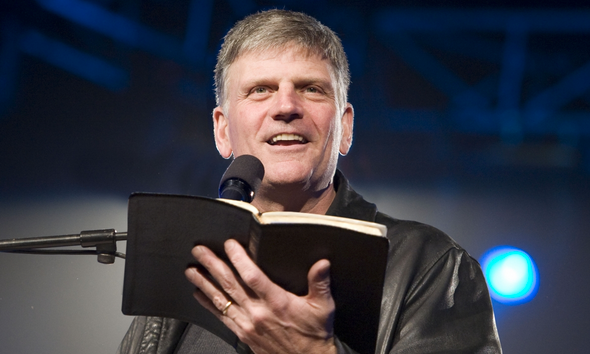 Franklin Graham, the chief of the Billy Graham Evangelistic Association as well as the Samaritan’s Purse aid ministry, has won a fight brought against him by LGBT activists, and now will be presenting the Gospel message in Sheffield, England, in May.

That’s after a nearly two-year battle against forces who wanted to shut down his message entirely.

According to a report in the BBC, Graham was accused of having “homophobic” views when he announced plans for a series of events in England, during which he was to appear in Sheffield Arena last June.

But Graham said that his speech “doesn’t hurt anybody” and he’s now due to appear in Sheffield on May 25, 2022.

The announcement follows the resolution of a legal dispute over his appearance, according to the Sheffield city council.

After he originally was scheduled to visit, “community groups” involving the pro-LGBT agenda campaigned against his speech, and signed a letter of protest to council officials.

The council, and the operator of its local arena, then backed out of their agreement, prompting the BGEA to open a legal dispute.

He continued, “As part of that settlement, BGEA are entitled to hold their event in the Sheffield Arena and this event has been scheduled for May 25, 2022.”

The BBC reported that council was asked, by the Local Democracy Reporting Service, if a “financial settlement” was part of the resolution, and the council official said, “The parties have, with no admission of liability, agreed [to] confidential terms for the settlement of the dispute.”

The BGEA’s arguments against the city’s cancellation of its agreement pointed out: “BGEA has filed claims against parties in Sheffield that it believes were responsible for cancelling its legally binding contracts.”

It explained there is no evidence that any event involving Graham “has ever caused a danger to public safety or incited public disorder.”

“There is no question that [the cancellation] was done under pressure from those with opposing views,” BGEA said.

“This disregard for principles of good faith and fair dealing, based on the mere suggestion that a person’s sincerely held religious views or statements are ‘hateful’ or would result in public disorder, should be very alarming to anyone who is genuinely concerned about diversity, inclusion and tolerance, let alone free speech and the free exercise of religious beliefs.”

The Christian Institute said the case was one of five separate legal actions pursued by the BGEA after Sheffield and other venues in Glasgow, Newcastle, Birmingham and Liverpool arbitrarily canceled the bookings to which they had agreed for Graham’s planned U.K. tour.

The institute reported, “Graham, who is currently recovering from heart surgery, was due to preach at eight venues across Britain in summer 2020. All eight canceled the gospel events because of opposition to his views on sexual ethics.”

Earlier this year, the BGEA won a case against Blackpool when a court said the city had discriminated against Christians by banning bus advertisements for a Lancashire Festival of Hope.

The institute reported, “Judge Claire Evans of Manchester County Court ruled ‘overwhelmingly’ in favor of Graham and the Lancashire Festival of Hope, stating that the Council’s actions in removing the adverts and taking sides against local Christians were ‘the antithesis of the manner in which a public authority should behave in a democracy.’”

WND reported early in 2020 that more than 2,000 churches in Britain came out in support of the BGEA after the venues were pressured by LGBT censors to shut him down.

Graham, known for his strong defense of traditional marriage, was to begin an eight-stop tour of the U.K. in Glasgow, Scotland, that May that would conclude in London in October. But all eight venues abandoned their contractual promises to have the events.