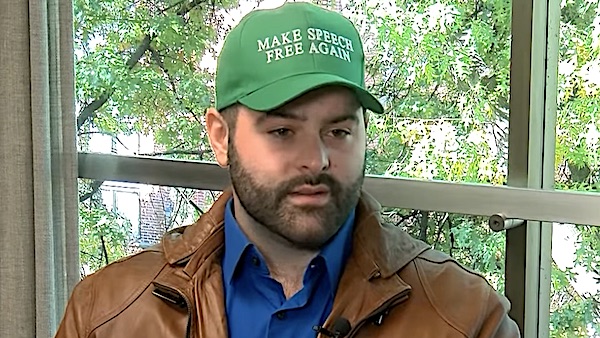 Gab founder Andrew Torba reacted on his platform to the governor’s comments Wednesday in a video posted on Twitter.

“Folks, the level of attack we are under right now in this spiritual war has never been greater,” Torba said. “We are facing media smears, literal demon hackers, banks banning us, and now the Governor of Texas for some reason smearing our community of millions of people.”

WND asked the governor’s office by telephone and email for comment, but received no response as of publication.

Torba urged Gab users to “kindly keep us in your daily prayers and if you can please consider upgrading to GabPRO, making a donation, or a purchase from our shop to support us.”

“We are funded by people like you and we need your support now more than ever to fight off these attacks.”

The governor said Wednesday, “Anti-semitic platforms like Gab have no place in Texas, and certainly do not represent Texas values.”

Flanked by state Reps. Phil King and Craig Goldman, he cited the lawmakers’ work on a bill.

As the Federalist noted, it’s unclear which legislation Abbott was referencing, although Goldman recently introduced a bill discussing the Texas Holocaust and Genocide Advisory Committee.

In the video, Abbott is shown sitting near an Israeli flag.

“What does represent Texas values is legislation like this by Rep. King and Rep. Goldman that fights antisemitism in Texas,” he said.

Torba, a Christian, insisted Gab is not an anti-Semitic platform.

“We protect the political speech of all Americans, regardless of viewpoint, because in this age of cancel culture nobody else will. That means unpopular viewpoints may be found on the site,” he said.

“There are many Jewish Gab users and customers, whose lawful speech we protect with just as much zeal as we would protect the lawful speech of any person of any faith, ethnicity, or creed.”

Torba said America “used to be like: a place where The People could speak freely regardless of their faith, ethnic background, or beliefs.”

“This is the America Gab is fighting to preserve. Apparently, Gov. Abbott doesn’t agree,” he said.

Further,  Torba said, the “enemies of freedom smear us with every name in the book because they hate America and they hate free speech.”