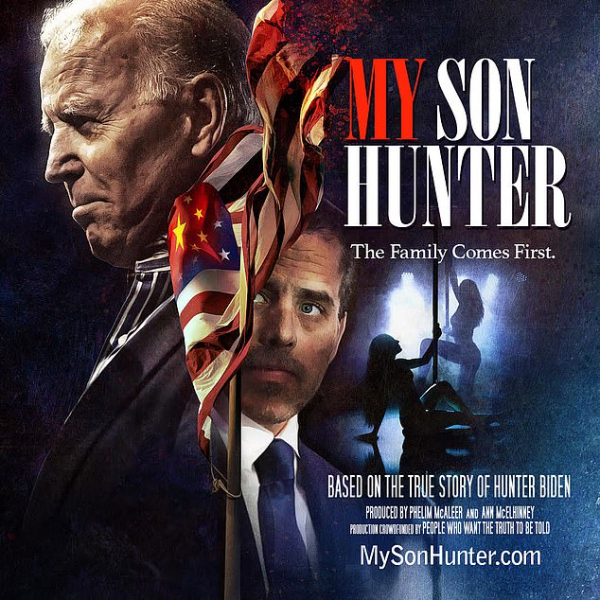 One year ago, the Irish-born filmmaking couple Phelim McAleer and Ann McElhinny – known for employing the medium of film to spotlight big stories and trends that establishment media either ignore or slant – began raising $2.5 million to produce a drama on the censored story of “Biden family corruption,” focusing on Hunter Biden and the revelations in his abandoned laptop that implicate his father in a lucrative, global influence peddling scheme.

Now, with Russia’s invasion of Ukraine and the New York Times effectively giving permission to establishment media to report the “laptop story” amid indications the president’s son could be indicted, “My Son Hunter” is about to be released.

In a video interview Wednesday with WND, McAleer said it’s “a perfect storm of facts and people finally being forced to admit that truth that is going to prove this movie to be correct and be relevant.”

The screenplays of McAleer and McElhinny typically rely on transcripts of sworn witness testimony, such as in their anti-abortion dramatic feature “Gosnell: The Trial Of America’s Biggest Serial Killer” and “ObamaGate: The Movie,” on the Trump-Russia collusion probe.

McAleer said “My Son Hunter” sticks to first-hand evidence, and an important part of the post-production process – he hopes the film will be released this summer – is having lawyers vet it.

McAleer said one year ago, as the project launched, that an “entertaining and enjoyable movie is the best way to tell the story of the Biden family’s corruption and to ensure as many people are educated about this as possible.”

McAleer himself has a background in media, having reported from Romania for seven years as a correspondent for the Financial Times. He also reported for the The Economist and covered Ireland for the Sunday Times of London. He began his career covering Northern Ireland for The Irish News in Belfast. He and his wife produced documentaries for the BBC and other networks before starting their company, The Unreported Story Society.

Much of “My Son Hunter,” shot in Serbia, is set in Ukraine, where Hunter Biden was paid $83,000 a month to sit on the board of a corrupt energy firm that was under investigation while his father was in charge of U.S. policy in the country. Joe Biden is on video boasting during a meeting of the Council on Foreign Relations that he forced the Ukrainian president to fire the country’s top prosecutor.

“As a journalist,” McAleer told WND on Wednesday, “I know that when these people don’t investigate these stories, and don’t dig into these stories, it’s because there’s an answer there that they don’t want to uncover.

Now, it appears, the filmmaker said, that establishment media is paying attention to the story because Hunter Biden is about to be indicted, “so they can say, well, we covered the story.”

“But it’s so funny to see them, with breathless voices and wonder, report on things that we were writing into the script of a movie a year or 18 months ago,” McAleer said.

“These people are not serious,” he said, “and the consequences are very dangerous and far reaching.”

McAleer, noting the power of film, said he wants people to “come for the entertainment and leave with a few questions.”

Hunter Biden is played by English actor Laurence Fox, who comes from a well-known acting family. Fox, who was in the PBS series “Victoria” and the British crime drama “Lewis,” also is a political activist, having founded the Reclaim Party in the United Kingdom to “reclaim” British values from politicians, who he says have “lost touch with the people.”

The director is Robert Davi, known among his more than 130 films for playing a James Bond villain in “License to Kill” and an FBI agent in “Die Hard.”

“There wasn’t one scene that Robert didn’t fight to make more interesting than what was on the page,” he said.

McAleer noted that “conservatives sometimes want to get a message over” and consequently fail artistically.

“You don’t want somebody preaching and lecturing, because that puts people off,” he said.

Gina Carano – who recently was fired by Disney’s LucasFilm from the “Star Wars” series for politically incorrect texts about the pandemic and the 2020 presidential election – plays a Secret Service agent in “My Son Hunter.” John James, who played the character of Jeff Colby in the prime-time soap opera “Dynasty” and its spin-off “The Colbys,” is Joe Biden.

McAleer said the writer, Brian Godawa, “brings a real sense of sympathy, humanity, to all these characters.”

Among Godawa’s previous credits are “To End All Wars,” starring Robert Carlyle and Kiefer Sutherland.

Meanwhile, this week at the White House, Biden press secretary Jen Psaki has continued to stick by the untenable stance that Joe Biden never talked with his son about the business deals while insisting he did nothing wrong.

The latest Hunter Biden BOMBSHELL will SHOCK YOU— it’s time to bring DOWN the ENTIRE Biden Crime Family pic.twitter.com/wR8JWMTFG0

Doocy: “There’s evidence that Biden was once office mates with Hunter and his brother Jim.”

Psaki: “That is not accurate.”

Doocy: “So when Hunter Biden is emailing a landlord ‘please have keys made for office mates Joe Biden and Jim Biden.”

Psaki: “They were not office mates.” pic.twitter.com/JtOY0VM043