Gov: 'I had no idea anyone alive could wreck this country as fast as Joe Biden is' 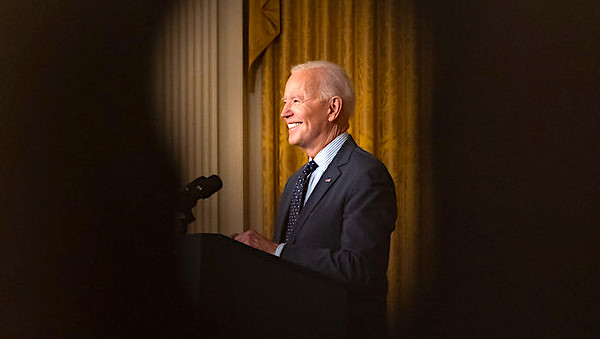 One of the governors who has confirmed plans to fight President Biden’s nationwide COVID-19 shots mandate – an order that apparently covers some 80 million people – also delivered a devastating assessment of the Democrat in the Oval Office.

“I had no idea anyone alive could wreck this country as fast as Joe Biden is,” said Kristi Noem, the governor of South Dakota.

Her comments came as she discussed the plans she and others have to challenge Biden’s mandate that employers with more than 100 workers require all of them to take the experimental COVID-19 vaccines.

The Biden order comes as there are new variants to COVID-19 being detected, and in some locations the infection rates are surging again.

There remain questions over whether the original vaccines, created by President Trump’s fast-tracking of the work while he was in office, are of use against the variants.

She confirmed Biden’s demands will not go unopposed.

“[I] think we have 14 different governors that have now said they will take some kind of action. As for South Dakota, I’ll fight to protect my people and to defend their freedoms. In fact, it has shocked me that the president actually said in his speech today that this wasn’t about freedom and personal choice at all, which I think is indicative of what’s really in his heart and his agenda that he’s got for this country,” she explained.

“Listen, this is not a power that is delegated to the federal government. This is a power for states to decide. In South Dakota, we’re going to be free, and we’re going to make sure that we don’t overstep our authority. So, we will take action. My legal team is already working, and we will defend and protect our people from this unlawful mandate.”

She noted Biden’s hypocrisy. He said himself only months ago that the vaccinations should not be required.

“He said he created jobs, and he’s destroying jobs. He’s said he’d love America and protect us, and then he makes friends with the Taliban and compromises our southern border. It’s unbelievable to me what he is doing. I knew he’d wreck this country. That’s why I campaigned so hard for President Trump. I had no idea anyone alive could wreck this country as fast as Joe Biden is.”

During Biden’s presidency, he’s not only allowed a terror stronghold to develop in Afghanistan, he’s created a crisis on the southern border, tried to take over all elections, allowed inflation to surge, attacked pro-lifers across the country and more.