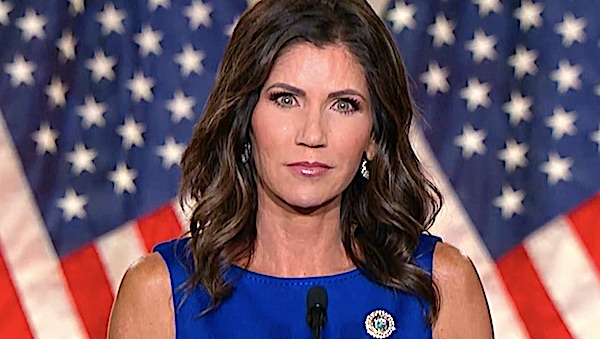 South Dakota Gov. Kristi Noem, whose state sustained immense damages financially when Joe Biden killed the Keystone XL pipeline project that would have crossed its rolling plains, says that was one of two catastrophic moves by Biden that gave Vladimir Putin the tools to invade Ukraine.

That invasion started overnight with Russia aggressors attacking multiple cities and ports and military operations, and dozens have been reported dead already. The Ukrainian population reportedly was in a panic, as Putin threatened anyone wanting to help them with “consequences.”

“When it comes to both foreign policy and his liberal energy agenda, President Joe Biden has embarrassed our nation. I can sum up President Biden’s incompetence in these areas with one simple story: a tale of two pipelines,” she wrote.

“On one hand, Biden blocked the crucial Keystone XL Pipeline, signaling to the world that American energy independence is no longer a priority. On the other hand, he green-lit the Nord Stream 2 pipeline, strengthening Russia’s energy hold on Europe. And in the process, he gave Russia the leverage to create the crisis that we are witnessing unfold in Ukraine.”

Biden did perform a flip-flop on Nord Stream 2, moving to restore sanctions in recent days even as the Russia military took aim at Ukrainian targets.

Noem, whose state lost significant financial investment with Biden’s decision to trash Keystone, said until Biden took office, “getting tough” on Russia was one of the rare issues on which conservatives and progressives agreed, with the 2019 adoption in Congress of a bipartisan measure for those Nord Stream 2 sanctions.

President Donald Trump had warned that the pipeline essentially would make Germany “a hostage” of Russia if things “ever happened that were bad.

“Maintaining Trump’s sanctions should have been an easy call for President Biden. Polish President Andrzej Duda told Trump that he fiercely opposed Nord Stream 2. The head of Naftogaz, a Ukrainian energy company, called the pipeline Russia’s most ‘dangerous geopolitical project.’ And thanks to America becoming a net exporter of energy during President Trump’s administration, the United States had created the capacity to sell our gas to European allies and reduce the reliance on Russian energy,” she explained.

But Biden threw it away, allowing Nord Stream to move forward, and in doing that, “handed away leverage to the Russians and doomed Ukraine in the process,” she said.

“Some theorize that President Biden simply reversed an important accomplishment of the Trump administration for spite. A more sinister theory suggests that because his son, Hunter Biden, served on the board of Burisma, a Ukrainian gas company, President Biden had, at a minimum, the appearance of a conflict of interest. To make matters worse, Hunter ‘received a $3.5 million wire transfer from Elena Baturina, the wife of the former mayor of Moscow,’ according to a congressional report,” she wrote.

But leaders of both parties had determined the Russian pipeline was bad, and Biden, by allowing it to advance, cost America its “vital leverage over Moscow,” she said.

Meanwhile Biden, pursuing the wishes of climate change activists, shut down Keystone, which would have benefited Noem’s state and others.

“In South Dakota, we were ready to complete construction of Keystone XL. The project would have brought thousands of jobs to our state, would have provided property tax revenues to our small towns for years, and would have lowered gas prices for Americans across the country,” she said.

However, Biden’s “shortsighted’ decision “to appease his liberal base” is now resulting in skyhigh gas prices for consumers.

“And we have lost our ability to counter Russian energy policy because we are significantly weakened from an energy production standpoint,” she wrote.

“Here in South Dakota, high gas prices are hurting everyone. It is a long way to drive anywhere in our rural state. Our long, cold winter is far from over. And thanks to Biden’s inflation, fuel costs continue to rise. Keystone would have helped ease those fears while giving America the flexibility to counter Russian aggression by expanding energy exports to Europe. I hope that Biden will someday explain why Canadian oil causes global warming, but Russian gas doesn’t.”

She said, “In this tale of the two pipelines, President Biden’s disastrous foreign policy and energy agenda intersect. His twin failures are putting our nation, and the entire free world, at risk.”