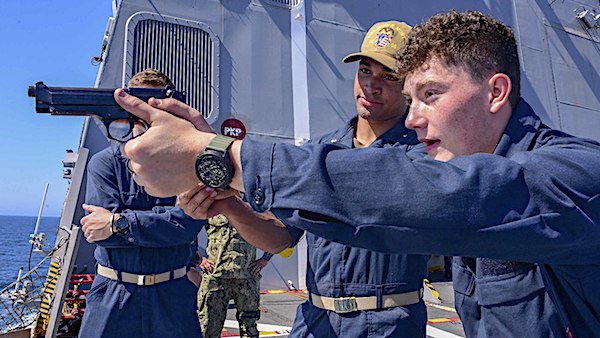 The Department of Justice announced just days ago its officials had consulted “stakeholders” in order to draft model “Red Flag” legislation that, if adopted, would let states take legal weapons away from innocent people because of someone else’s suspicions.

Now the National Association for Gun Rights wants to know who were those “stakeholders.”

According to a report at Big League Politics, it has filed a Freedom of Information Act request for information about those influencers.

“In their June 7th press release, the DOJ stated that they consulted so-called stakeholders to draft model Red Flag gun confiscation legislation. We want to know who they consulted – because they surely didn’t ask us,” said Dudley Brown, president of the firearms organization.

Those orders also are called “Extreme Risk Protection Orders” and already are in place in a number of left-leaning states.

“According to the ‘model’ legislation published on the DOJ’s website, the government agency recommends stringent ‘Red Flag’ gun confiscation legislation be passed. Make no mistake about it, these bills are constructed in a manner that allows governments to confiscate individuals’ firearms based on flimsy accusations coming from acquaintances, ex-partners with an axe to grind, neighbors, doctors, and school teachers,” the association explained.

“Under red flag laws, government officials can confiscate privately owned firearms from innocent Americans, without so much as a hearing and the right for an individual to defend himself in court.”

“American citizens deserve to know what groups or private individuals consulted with the DOJ during their secretive meetings to eviscerate the Second Amendment and due process rights. Backroom deals involving government agencies crafting gun confiscation bills sounds like something straight out of the novel 1984,” explained Brown.

The association wants to know who was invited to meet with the DOJ, how many times did meetings occur, and did anyone keep records of the meetings.