Hillary Clinton denies knowing about group that supported her campaign 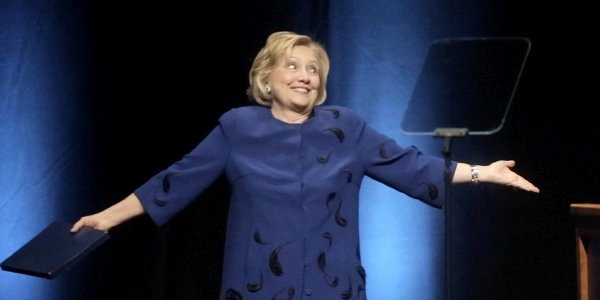 Hillary Clinton benefited from a wide range of outside groups who advocated for her political career even as she twice failed in her campaigns for the Oval Office.

One of those was a group called Democracy Partners, run by Bob Creamer, who admitted several years ago that Clinton’s then-doomed presidential campaign was aware of his operations.

Now, however, Clinton has denied knowing about his organization, him, or anything else connected.

The comments come in a video captured by Project Veritas:

Project Veritas, created by James O’Keefe in 2010 as a non-profit journalism enterprise to continue his undercover reporting work, was the group that originally caught a Democrat operative boasting about vote fraud, busing people in to change election results, in support of Clinton.

One member caught in that group, Shirley Teter, sued Project Veritas for defamation shortly after its videos were released, but eventually lost and was ordered by a federal judge to pay Project Veritas thousands for attorneys’ fees in the case.

Now Clinton has been caught on video denying knowledge of the group, Creamer or the situation.

“After Project Veritas published its investigation into Democracy Partners which revealed the group was responsible for inciting violence at Trump rallies, Creamer resigned, saying, ‘I am unwilling to become a distraction to the important task of electing Hilary Clinton.’ Creamer was featured in that investigation saying that Clinton’s campaign is aware of the group’s activities ‘through chain of command.’

“When pressed further, Clinton declined to state if she would pay for Teter’s legal bills, including when approached by a separate Project Veritas reporter while leaving the National Action Network luncheon event where Clinton spoke,” Project Veritas’ report said.

Last week U.S. District Judge Martin Reidinger overruled a decision by a court clerk to deny Project Veritas’ motion for Teter to pay legal costs questioning the basis of her claim that she was ‘indigent’ and therefore could not afford the expenses.

The judge also expressed bewilderment over why a baseless lawsuit was brought by several ‘pro bono’ attorneys from around the country, one of whom was quick to protest, without being asked, ‘we’re not paid by the Hillary Clinton campaign or by the Democratic party or anything like that,” Project Veritas reported.

That, the judge said, “only raised more questions by his unsolicited statement specifically disclaiming that the lawsuit was being funded by the Clinton campaign or the Democratic Party.”

Teter had been described in the earlier Project Veritas videos as a plant at a rally for then-candidate Donald Trump before the 2016 election. She denied being a plant, sued, but lost.

WND had reported at the time Project Veritas obtained undercover videos of the pro-Clinton actions.

Among the videos then was one of Scott Foval, who had worked for People for the American Way, a George Soros-funded group and recently with Americans United for Change.

He said, “You know what? We’ve been busing people in to deal with you f—ing a—–es for 50 years, and we’re not going to stop now.”

Foval also said he and his fellow operatives are “starting anarchy” by creating “conflict engagement … in the lines at Trump rallies.”

Creamer, founder and partner of Democracy Partners, and husband of Rep. Jan Schakowsky, D-Ill., was credited by Foval with coming up with strategies to boost Democrats.

The Federal Elections Commission was asked to investigate the evidence in the videos, which show Democratic operatives not only explaining how they were trying to influence the presidential election by manipulating the vote but boasting about it.