House panel to call Fauci as witness in COVID-origins probe 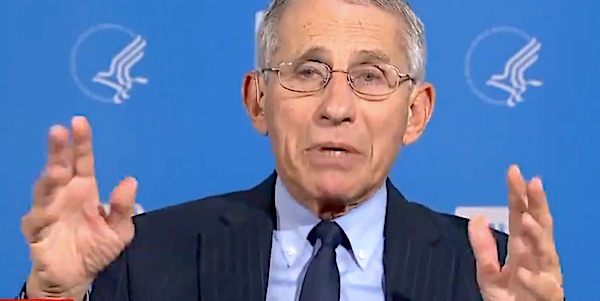 Republicans on a House committee announced Wednesday that Dr. Anthony Fauci will be among the expert witnesses they will invite to a forum on the origins of COVID-19.

Despite growing evidence the virus originated from the Wuhan Institute of Virology, House Democrats have refused to investigate.

Rep. Steve Scalise of Louisiana, the Republican whip, and Rep. James Comer, the ranking member of the House Committee on Oversight and Reform, plan to hold two witness panels and one panel with members.

“The left-wing media called it a ‘fringe conspiracy theory,’ Big Tech censored it, activists in white lab coats dismissed it and Democrats ignored it, but there is growing evidence communist China started the pandemic, covered it up and is responsible for the deaths of more than 600,000 Americans and millions more worldwide,” Scalise and Comer said in a statement.

Fauci, the director of the National Institute of Allergy and Infectious Diseases, and Francis Collins, the director of the National Institutes of Health, have been invited to be on the second witness panel. Another invitee is Dr. David Hassell, the chairman of P3CO, a group within the Department of Health and Human Services responsible for reviewing funding decisions for research involving deadly pathogens.

Some Republican lawmakers have called for Fauci’s resignation after many of his emails were published by the Washington Post and Buzzfeed News.

Scalise and Comer said that despite House Speaker Nancy Pelosi’s “efforts to create diversions and cover this up, the American people deserve the truth and are demanding accountability, and House Republicans will insist on getting these answers.”

“The House Democrat majority’s refusal to follow the science, listen to the experts, and investigate the origins of COVID-19 is a dereliction of their duty,” the said.