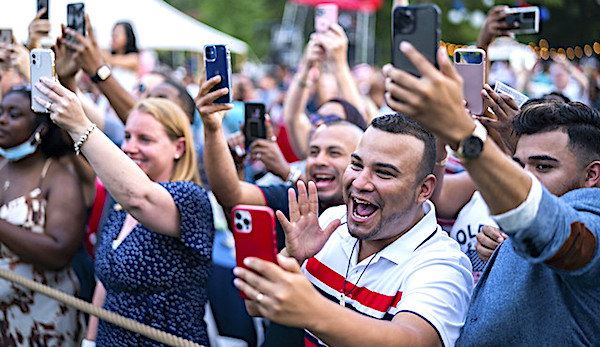 The Democratic Party in America over the past few years has moved into some uncharted territory – starting with Barack Obama’s threat to “fundamentally change” the nation with his socialized health care plan, government-promoted abortion, rampant alternative sexual lifestyle choices and more.

Lately, under Joe Biden, the party and its leaders have demanded that the Supreme Court be changed to support the Democrat agenda, that government spend trillions of dollars it doesn’t have on their projects and fringe social causes – like abortion and transgenderism – be part of the government’s goals.

Now a new poll has confirmed what already was evident, that a significant number of Democrats – almost one in four – say the U.S. Constitution is not a relevant document today.

If you add to that 23% figure the Democrats who simply don’t know and are unsure, the total reaches 31% of Democrats who cannot – or will not – say the nation’s founding document is relevant.

Most voters say that the Constitution is a relevant document today, but Democrats are more than 3x as likely as Republicans to say that it is not. pic.twitter.com/R0MvrjVYrQ

The polling is from Echelon Insights and was done July 15-18.

Only 6% of the Republicans were in the same befuddled state about the Constitution.

The results revealed 87% of Republicans confirm the Constitution is relevant today, and they were joined by 77% of independents. But only 69% of Democrats agreed.

Overall, 77% said that the Constitution remains relevant today and 9% reported they are “unsure.” Fourteen percent said the document is now irrelevant.

Further, 86% of voters said that the Constitution is “very” or “somewhat” important in their own politics, with only 3% reporting it is not important at all. Six percent said it is “not so important.”

And 74% say, “The Constitution as written is a good document and should be kept basically intact,” while only 14% say it should be scrapped and replaced with something else.

The highest numbers of those who believe the Constitution should be replaced were found among black voters and those under 50 years of age.

Regarding the proposal of a Constitutional Convention to more easily make amendments to the Constitution, 46% of voters feel that this would be a bad idea. pic.twitter.com/H9fIK6FNvE

A plurality, 46%, said a new constitutional convention where changes could be made more easily than through an amendment process would be a bad idea. Another 25% were unsure and only 29% said that would be a good process to follow.

The party split was obvious there, with only 13% of GOP members liking the idea of a convention, while 44% of Democrats liked that concept.

The Dobbs decision + an increased national focus on SCOTUS got us wondering what Americans think about the Constitution and the many reforms being floated, particularly by Democratic lawmakers. Here’s what we found