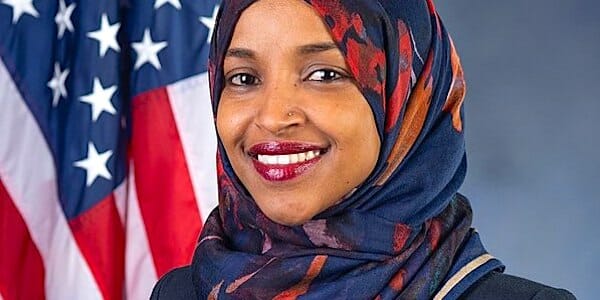 Rep. Ilhan Omar, D-Minn., says she does not regret her statements equating Israel and the United States with terrorist organizations such as Hamas and the Taliban.

After the 11 days of rocket fire on Israeli citizens by Hamas and retaliation by Israel, Omar wrote on Twitter: “We have seen unthinkable atrocities committed by the U.S., Hamas, Israel, Afghanistan, and the Taliban.”

In an interview Tuesday, CNN’s Jake Tapper asked if she now regretted the tweet, noting she drew criticism from members of Congress, including in her own party.

The Minnesota lawmaker argued that the context of her remarks was her conversation earlier that day with Secretary of State Antony Blinken in which she asked him how victims of alleged crimes against humanity in Israel, Palestine and Afghanistan can seek justice.

Tapper recited some of her past anti-Israel rhetoric and asked, “Do you understand why some of your fellow House Democrats, especially Jews, find that language antisemitic?”

She responded with criticism of her colleagues, saying she has welcomed their requests for “a conversation to learn from them [and] for them to learn from me,” but the members should “realize that they haven’t been partners in justice.”

“They haven’t been engaging in seeking justice around the world, and I think I will continue to do that,” she said. “It is important for me as someone who knows what it feels like to experience injustice in ways that many of my colleagues don’t.”

“And I hear that,” she replied. “I have obviously clarified and apologized when I have felt that my words have offended. And it’s really important, right? As I’ve explained to my colleagues, they have engaged in Islamophobic tropes. I have yet to receive an apology.”

Ilhan Omar: “I don’t” regret equating U.S. and Israel with the Taliban and Hamas terrorists. pic.twitter.com/XpR0e6kVeo

Earlier this month, a dozen Jewish Democrats in Congress asked Omar to clarify her remarks. In her “clarification,” she said the insinuation that she was providing cover for terrorists was Islamophobic.

“I was in no way equating terrorist organizations with democratic countries with well-established judicial systems,” Omar said.

“We welcome the clarification by Congresswoman Omar that there is no moral equivalency between the US and Israel, and Hamas and the Taliban.”

However, when CNN’s Dana Bash described the statement regarding Omar as a “rebuke” for appearing to “draw false equivalencies,” Pelosi corrected the network host.

“We did not rebuke her. We thanked [her], acknowledged that she made a clarification,” the House speaker said. “… Congresswoman Omar is a valued member of our caucus.”

The Daily Wire also pointed out that in March 2019, after Omar had made anti-Semitic remarks, Pelosi initially said she would support a blanket condemnation of anti-Semitism. But Pelosi backed down, allowing Omar and other, to rewrite the resolution, condemning “all hate” instead of specifically anti-Semitism.