It's a recession! 2nd quarter numbers meet the definition 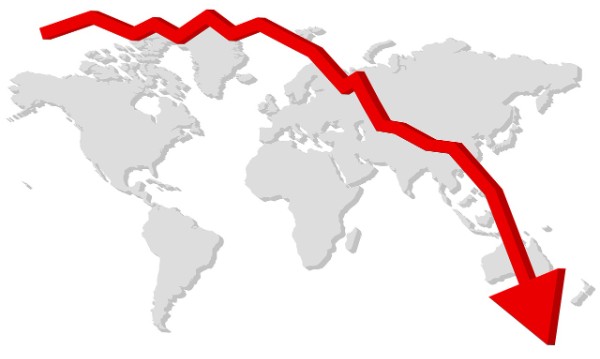 The second quarter economic numbers for the United States were released on Thursday, and Joe Biden’s economy now meets the traditional definition of a recession: negative economic growth for two consecutive quarters.

The Gross Domestic Product contracted 0.9% in the second quarter, following the 1.6% contraction from the first part of the year.

The numbers, from the Bureau of Economic Analysis, meet the definition of a recession: two straight quarters of economic decline.

That’s even though the Biden White House for weeks now frantically has been trying to prevent that conclusion – mostly by redefining the term. Biden’s advisers have repeatedly said just because there’s two quarters of decline doesn’t necessarily make it a recession.

But the Examiner reported, “Thursday’s numbers indicate that the economy has been struggling to stay above water during the historic monetary policy tightening cycle by the Federal Reserve, which is trying to lower soaring inflation. Residential investment cratered, a sign of the housing market slowing as mortgage rates rise. Consumer spending on goods also turned negative.”

Actually, the most recent inflation number for Joe Biden’s economy was 9.1%, a massive surge that is hurting low to middle income families who are having difficulty meeting their food, fuel and utility costs because of exploding prices.

Brian Marks, of the University of New Haven’s Entrepreneurship and Innovation Program, told the Examiner the numbers were expected.

“It’s an estimate and we’ll see what happens, but it certainly does not come as a surprise,” he said.

The Examiner pointed out: “The Biden administration had been working to preempt the Thursday report, fearing it would turn out to be in the red. The White House released a blog post asserting that two consecutive quarters of negative growth doesn’t necessarily indicate the country is in a recession.”

But that definition has been in use for years.

Calvin Moore, a spokesman for the Congressional Leadership Fund, which backs House Republicans, explained, “Democrats can’t solve the massive economic challenges our nation is facing because they won’t even admit there’s a problem to begin with. Families need relief, but Democrats’ only solution is doubling down on the same failed policies that got us here in the first place.”

In fact, Democrats continue working on massive spending plans that would further push inflation up.

In response, the Federal Reserve has launched a series of huge interest rate hikes – trying to tame inflation. The result has been that the economy is slowing massively, because of the high costs of borrowing created by the interest hikes.

Fed Chairman Jerome Powell just this week claimed that there are parts of the economy that are doing well – and so, “I do not think the U.S. is currently in a recession.”

According to Fox Business, the “raging inflation” and “higher interest rates” are forcing consumers and businesses to cut spending.

“Recessions are technically defined by two consecutive quarters of negative economic growth and are characterized by high unemployment, low or negative GDP growth, falling income and slowing retail sales, according to the National Bureau of Economic Research (NBER), which tracks downturns,” the report explained.

Only a day earlier, WND reported on White House and other efforts to deny that there is a recession.

His advisers already were ““moving the goalposts” on the issue.

And the legacy media joined up with Biden’s campaign.

In fact, it is Mollie Hemingway, of The Federalist, who pointed out legacy media player AP’s adoption of Biden’s agenda.

A commentary at Twitchy pointed out the evidence on social media:

“One of the words the White House has been redefining lately is ‘recession.’ When reality isn’t conforming to the message you want to put out, simply change the definition of the inconvenient word! Even with an approval rating that might soon have Team Biden trying to add ‘dismal’ to the list of words they’re trying to redefine, the media have demonstrated a willingness to keep carrying the White House’s narrative water when it comes to the economy. The Associated Press was among media outlets showing how it’s done.”

By one common definition — the economy shrinking for consecutive quarters — the U.S. economy is on the cusp of a recession.

Yet that definition isn’t the one that counts. https://t.co/Bw1am1viQ4

The economy shrinking for two consecutive quarters would meet a longstanding assumption for when a recession has begun.

But with the U.S. adding 2.7 million jobs over those same six months, economists say that wouldn’t mean a recession has started.https://t.co/3GuHKvKSSZ

This is propaganda. The number of jobs isn’t the determining factor of a recession. If that were the case, the Soviet Union had a great economy with zero percent unemployment https://t.co/S7eDWHNRV6

The problem for the Biden administration, and the legacy media outlets supporting it, is that ghastly 9.1% inflation that Biden’s economy has allowed.

Along with gasoline costing more than $5 a gallon, the inflation has hurt tens of millions of low to middle income families that are struggling just to pay food and utility costs.

Also, the Federal Reserve has launched a series of interest rate increases virtually guaranteed to bring the nation’s housing boom to a halt as people no longer will qualify for mortgages required for their dream homes.

He noted the White House is trying to minimize the discussion about a recession by “changing the accepted definition.”