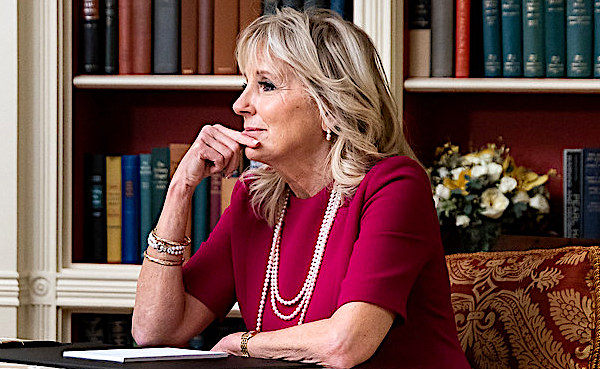 Joe Biden long has been ridiculed for his off-color remarks and comments to the public, and during speeches, and now his first lady, Jill Biden, is in the bull’s-eye for the same offense.

She appeared at a “LatinX IncluXion” event on Monday and called for Hispanics to band together in the coming 2022 midterm elections and pointed to the community’s “diversity” saying members are as “unique as breakfast tacos.”

She also insisted that the popular bodegas are actually “bogidas.”

At a “Latinx IncluXion” conference, Jill Biden says the Hispanic community is as “unique” as tacos.pic.twitter.com/Vb5wJyYGWB

Jill Biden says Hispanics are as “unique” as tacos and calls bodegas “bogidas.”

No wonder Hispanics are fleeing the Democratic Party! pic.twitter.com/rhBB1pSNvZ

The National Association of Hispanic Journalists immediately admonished her for demonstrating “a lack of cultural knowledge and sensitivity to the diversity of Latinos in the region.”

NAHJ encourages @FLOTUS & her communications team to take time to better understand the complexities of our people & communities.

We are not tacos.

Our heritage as Latinos is shaped by various diasporas, cultures & food traditions.

Do not reduce us to stereotypes. pic.twitter.com/KQIq5gwsht

The organization explained, “We are not tacos. … Do not reduce us to stereotypes.”

The Washington Examiner explained, “Biden was one of the scheduled speakers at the luncheon, which aimed to increase awareness of how Latinos are ‘integral’ to diversity efforts in the workplace, according to the event description. But the occasion will perhaps best be known for how critics, Republicans and conservative Hispanics among them, chided the first lady for not just the name of the event but also what she said.”

There even was criticism of the event’s use of the term “Latinx,” which is considered a “gender-neutral” version of “Latino.”

But the report point out, “Only 2% refer to themselves as Latinx, while 40% said they were offended by the term, according to a December poll. Another 30% said they were less likely to vote for a candidate who used the term.”

“Everyone knows that not a single Hispanic uses ‘Latinx,’” explained Carolina Amnesty, a Republican running for Congress in Florida. “The reason why woke corporations and Democrats keep imposing it on us is to control how we think about gender, and thus, how we vote. Unfortunately for them, we believe in God, Family, and Freedom — not MarXism.”

Jill Biden also unleashed a verbal assault on the Supreme Court over its recent Dobbs decision that overturned Roe v. Wade and returned regulation of the nation’s lucrative abortion industry to states.

But political pollster Frank Luntz noted, “Any productive work that Jill Biden does here will be cancelled out by the event calling itself the Latinx Luncheon.”

The fiasco erupts just as Joe Biden’s popularity among Hispanic voters, who are a crucial voting bloc for Democrats, is plunging.