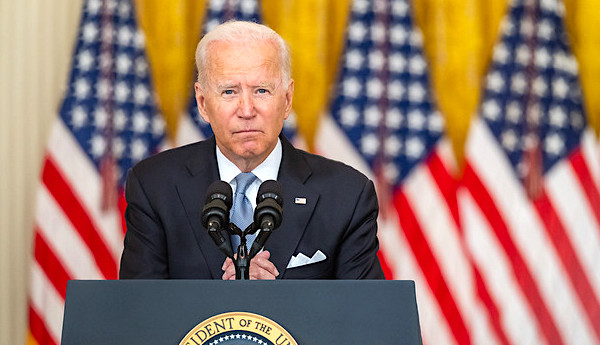 Recent polling has shown Joe Biden’s approval rating – for doing his job as president – has plunged to 38% of Americans, devastatingly bad.

The Quinnipiac University poll showed a full 50% disapprove of his coronavirus response, 55% of his work on the economy, 58% of his job commanding the military, 54% on taxes, 58% on foreign policy and a whopping 67% on immigration and border issues.

Fifty-five percent say the Biden administration is simply “not competent” to run the government.

And now an editorial from the Washington Examiner has proposed an explanation for why the administration is “not competent”: Biden’s appointees run and hide when a problem appears.

“Biden’s administration faces crises of its own making at the southern border, at the nation’s ports, in Afghanistan, with inflation, and in public health,” the explanation began. “That’s a lot.”

But making things worse “is the tendency (amounting to an instinct) of top officials to disappear at the first sign of trouble and blame other people. As battle is joined (literally, not just metaphorically, in Afghanistan), they do not march to the sound of the guns but scuttle away. They are utterly unsuited to the jobs they occupy.”

Targeted by the editorial writers were Transportation Secretary Pete Buttigieg, HHS Secretary Xavier Becerra, Treasury Secretary Janet Yellen, Homeland Security Secretary Alejandro Mayorkas and Secretary of State Antony Blinken. Not mentioned was Vice President Kamala Harris, who was given the job of handling the southern border crisis and waited months before even visiting in the region.

Buttigieg went “missing,” taking a “sabbatical to bond with his newly adopted son,” while a national shipping crisis developed, the editorial said.

“This is, in isolation, perhaps a good thing. But it is lamentable, ridiculous, and reprehensible to continue his domestic seclusion when a crisis explodes in his area of responsibility. He is a Cabinet secretary, for goodness sake, and should be working flat-out, not going AWOL while America’s supply chain breaks.”

Then there’s Becerra, who has “no public health experience.” He took the job in the middle of a once-in-a-century pandemic “and predictably made no visible contribution to the government’s COVID-19 response,” the editorial found.

“What he does with his days is anyone’s guess, for he is an invisible figure.”

Yellen, meanwhile, “has stood idly by as inflation has spiraled upward to its highest level in 13 years. If it ever concerned her when it was specifically her job to keep inflation under control, it certainly seems not to bother her now. For she speaks out in support of Biden’s demand for yet another $5.5 trillion in needless welfare spending,” the editorial said.

“Unless you get a 6% raise in your pay, your income is falling.”

Mayorkas actually is eager to get in front of TV cameras, it said.

“But once he is there, Mayorkas passes the buck, claiming that former President Donald Trump is the reason illegal immigrants rushed the border in record numbers right after Biden took office and encouraged mass northern migration,” the editorial said.

And then Blinken “continues to bleat about the Taliban’s lack of woke inclusiveness,” the writers concluded. “It is embarrassing to hear him. Of course these jihadists were not going to treat women properly after American forces departed in shambles, leaving billions of dollars of military equipment behind. If Blinken had been more concerned in July about the Taliban being the Taliban, maybe our nation’s chaotic and lethal retreat from reality could have been avoided.”

The editorial notes that Biden’s campaign claim was that “he would return America to normality. He was supposedly going to restore competence and common sense to the government. But he has brought neither. Instead, he has staffed his administration with incompetents who leave a vacuum where authority should be.”